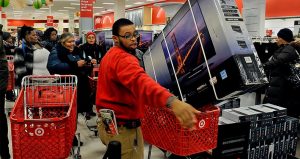 Things are looking up for Target as store sales appear to be improving. Actually, the company boosted its second-quarter earnings forecast, on Thursday, which means both the executives and investors are happy.

As such, the retailer now expects a “modest increase” in the second-quarter comparable-store sales. This, of course, is a metric widely regarded among Wall Street investors. It is a full turn around for Target, who had initially predicted this metric would be in the negative; continuing a four-quarter trend.

With that, shares of Target shot up more than 3 percent in Thursday morning trading, higher than Wal-Mart but in line with other retailers like Kohl’s and Macy’s. Now, Target remains focused on its current plan to inject $7 billion into expansion over the next three years.

Stifel analyst Mark Astrachan comments, “Overall, we find the guidance update notable, particularly in light of worsening trends across the majority of retailers. We believe the positive guidance revision indicates early success of the company’s investments into the business, including in price, labor, and digital.”

All in all, then, Target said it now has expectations for second-quarter earnings to register higher than it had originally forecast: between $0.95 and $1.15 per share. Also, the company said net tax related to global sourcing operations may have uniquely helped.

As with most retailers, the big problem for Target has been lower and lower numbers in physical stores. Web traffic, though, is doing just fine, according to Kantar Retail’s Leon Nicholas.

He says, “Come fall, when Target launches new brands, it should bring excitement back to storesBut it doesn’t quite solve some of the fundamentals. It doesn’t solve the ongoing grocery issue.”

Strategy and supply chain consultant Brittain Ladd comments that Target still has some room to grow both online and in the physical market if they want to compete with the likes of Amazon and Wal-Mart. Lower prices, store remodels, and smaller formats, she says, could help the company get new traction.

“The concern I have,” she says, “is that it will become more difficult for Target to perform to Wall Street and customer expectations as they transform. It remains to be seen if Target is actually reconnecting with customers or if Target merely had a better quarter than expected.”

Beyond Meat Trading Up 4.5%