Complete the form below to receive the latest headlines and analysts' recommendations for Canadian Natural Resources with our free daily email newsletter:

According to Zacks, analysts expect that Canadian Natural Resources will report full-year sales of $17.21 billion for the current fiscal year, with estimates ranging from $17.15 billion to $17.28 billion. For the next financial year, analysts anticipate that the firm will report sales of $17.67 billion, with estimates ranging from $17.64 billion to $17.70 billion. Zacks’ sales calculations are an average based on a survey of sell-side research analysts that cover Canadian Natural Resources.

Canadian Natural Resources (NYSE:CNQ) (TSE:CNQ) last released its earnings results on Thursday, November 7th. The oil and gas producer reported $1.04 earnings per share (EPS) for the quarter, topping the consensus estimate of $0.60 by $0.44. The company had revenue of $4.67 billion for the quarter, compared to analyst estimates of $4.46 billion. Canadian Natural Resources had a return on equity of 7.87% and a net margin of 18.37%. During the same period in the prior year, the firm posted $1.11 EPS.

The business also recently declared a quarterly dividend, which will be paid on Wednesday, January 1st. Stockholders of record on Wednesday, December 11th will be paid a $0.285 dividend. This is an increase from Canadian Natural Resources’s previous quarterly dividend of $0.28. This represents a $1.14 dividend on an annualized basis and a dividend yield of 4.07%. The ex-dividend date of this dividend is Tuesday, December 10th. Canadian Natural Resources’s dividend payout ratio (DPR) is presently 52.56%.

Recommended Story: How the Consumer Price Index (CPI) is calculated? 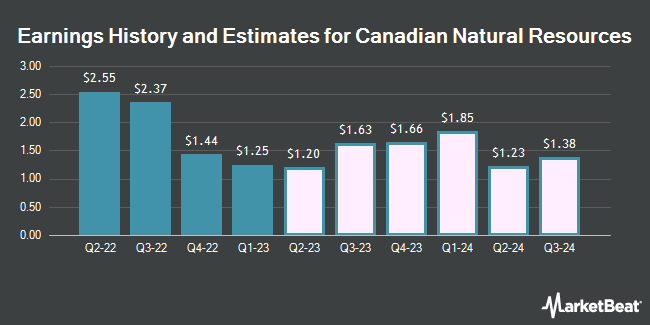