Complete the form below to receive the latest headlines and analysts' recommendations for DHT with our free daily email newsletter:

Equities research analysts expect that DHT Holdings Inc (NYSE:DHT) will report earnings of $0.74 per share for the current fiscal quarter, Zacks Investment Research reports. Two analysts have made estimates for DHT’s earnings, with estimates ranging from $0.70 to $0.77. DHT posted earnings of $0.13 per share during the same quarter last year, which suggests a positive year-over-year growth rate of 469.2%. The company is scheduled to announce its next quarterly earnings results on Wednesday, February 5th.

On average, analysts expect that DHT will report full year earnings of $0.83 per share for the current financial year, with EPS estimates ranging from $0.79 to $0.86. For the next fiscal year, analysts anticipate that the business will post earnings of $1.29 per share, with EPS estimates ranging from $1.27 to $1.30. Zacks’ earnings per share averages are an average based on a survey of sell-side analysts that that provide coverage for DHT.

DHT (NYSE:DHT) last issued its earnings results on Wednesday, October 23rd. The shipping company reported ($0.06) earnings per share for the quarter, topping the Zacks’ consensus estimate of ($0.07) by $0.01. The business had revenue of $58.89 million for the quarter, compared to the consensus estimate of $55.16 million. DHT had a net margin of 2.04% and a return on equity of 2.66%. The firm’s revenue for the quarter was up 22.2% on a year-over-year basis. During the same period in the previous year, the company earned ($0.15) earnings per share.

A number of equities analysts recently weighed in on the stock. ValuEngine downgraded shares of DHT from a “sell” rating to a “strong sell” rating in a report on Thursday, November 7th. Zacks Investment Research upgraded shares of DHT from a “hold” rating to a “strong-buy” rating and set a $8.25 target price on the stock in a report on Monday, October 21st. One equities research analyst has rated the stock with a sell rating, one has given a hold rating, two have issued a buy rating and one has given a strong buy rating to the company. The company currently has an average rating of “Buy” and an average price target of $8.13.

DHT Holdings, Inc, through its subsidiaries, owns and operates crude oil tankers primarily in Oslo, Norway and Singapore. As of March 18, 2019, it had a fleet of 27 very large crude carriers with a capacity of 8,360,850 deadweight tons. The company was founded in 2005 and is headquartered in Hamilton, Bermuda. 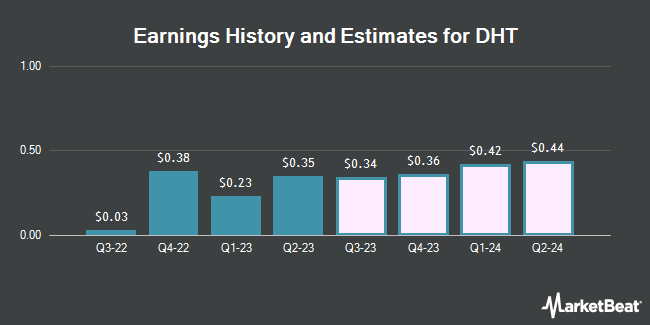 Receive News & Ratings for DHT Daily - Enter your email address below to receive a concise daily summary of the latest news and analysts' ratings for DHT and related companies with MarketBeat.com's FREE daily email newsletter.