Complete the form below to receive the latest headlines and analysts' recommendations for Lumentum with our free daily email newsletter:

Shares of Lumentum Holdings Inc (NASDAQ:LITE) have earned a consensus recommendation of “Buy” from the twenty ratings firms that are covering the stock, MarketBeat.com reports. One analyst has rated the stock with a sell rating, two have assigned a hold rating and fifteen have issued a buy rating on the company. The average twelve-month price objective among brokerages that have issued ratings on the stock in the last year is $79.71.

Lumentum (NASDAQ:LITE) last posted its quarterly earnings data on Thursday, October 31st. The technology company reported $1.44 earnings per share (EPS) for the quarter, topping analysts’ consensus estimates of $1.20 by $0.24. Lumentum had a negative net margin of 2.18% and a positive return on equity of 17.81%. The company had revenue of $449.90 million during the quarter, compared to the consensus estimate of $448.16 million. During the same period in the previous year, the firm posted $1.31 EPS. The firm’s revenue was up 27.1% compared to the same quarter last year. On average, sell-side analysts predict that Lumentum will post 4.08 earnings per share for the current year.

Lumentum Holdings Inc manufactures and sells optical and photonic products in the Americas, the Asia-Pacific, Europe, the Middle East, and Africa. The company operates through two segments, Optical Communications and Commercial Lasers. The Optical Communications segment offers components, modules, and subsystems that enable the transmission and transport of video, audio, and text data over high-capacity fiber optic cables. 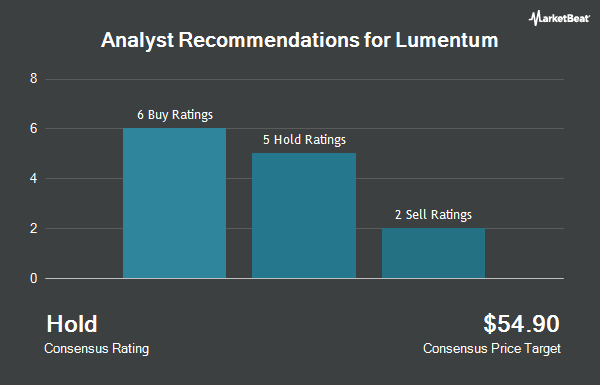 Receive News & Ratings for Lumentum Daily - Enter your email address below to receive a concise daily summary of the latest news and analysts' ratings for Lumentum and related companies with MarketBeat.com's FREE daily email newsletter.