Complete the form below to receive the latest headlines and analysts' recommendations for Kadmon with our free daily email newsletter:

Analysts expect Kadmon Holdings Inc (NYSE:KDMN) to announce sales of $2.75 million for the current quarter, according to Zacks. Two analysts have made estimates for Kadmon’s earnings, with the highest sales estimate coming in at $5.23 million and the lowest estimate coming in at $260,000.00. Kadmon posted sales of $230,000.00 during the same quarter last year, which suggests a positive year over year growth rate of 1,095.7%. The business is scheduled to issue its next quarterly earnings results on Thursday, March 5th.

According to Zacks, analysts expect that Kadmon will report full-year sales of $2.59 million for the current financial year, with estimates ranging from $900,000.00 to $5.92 million. For the next fiscal year, analysts anticipate that the company will post sales of $16.54 million, with estimates ranging from $860,000.00 to $38.56 million. Zacks’ sales calculations are an average based on a survey of analysts that follow Kadmon.

In other Kadmon news, major shareholder Perceptive Advisors Llc purchased 1,470,588 shares of the company’s stock in a transaction on Monday, November 18th. The shares were bought at an average cost of $3.40 per share, with a total value of $4,999,999.20. The purchase was disclosed in a legal filing with the SEC, which can be accessed through the SEC website. Insiders own 2.85% of the company’s stock. 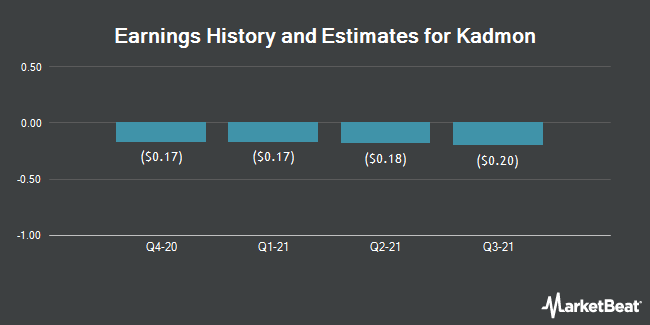 Receive News & Ratings for Kadmon Daily - Enter your email address below to receive a concise daily summary of the latest news and analysts' ratings for Kadmon and related companies with MarketBeat.com's FREE daily email newsletter.