Complete the form below to receive the latest headlines and analysts' recommendations for LogMeIn with our free daily email newsletter:

BidaskClub downgraded shares of LogMeIn (NASDAQ:LOGM) from a sell rating to a strong sell rating in a research note issued to investors on Thursday morning, BidAskClub reports.

LogMeIn (NASDAQ:LOGM) last posted its quarterly earnings data on Thursday, February 13th. The software maker reported $1.43 earnings per share for the quarter, beating the consensus estimate of $1.40 by $0.03. LogMeIn had a positive return on equity of 7.25% and a negative net margin of 1.15%. The company had revenue of $322.68 million during the quarter, compared to analysts’ expectations of $320.48 million. During the same period in the prior year, the business earned $1.47 earnings per share. LogMeIn’s revenue for the quarter was up 4.0% compared to the same quarter last year. Sell-side analysts anticipate that LogMeIn will post 3.85 earnings per share for the current year.

In related news, CFO Edward K. Herdiech sold 4,036 shares of the firm’s stock in a transaction on Wednesday, February 19th. The stock was sold at an average price of $85.47, for a total value of $344,956.92. Following the completion of the transaction, the chief financial officer now directly owns 16,536 shares of the company’s stock, valued at $1,413,331.92. The sale was disclosed in a document filed with the SEC, which can be accessed through the SEC website. 2.40% of the stock is owned by company insiders.

LogMeIn, Inc provides a portfolio of cloud-based communication and collaboration, identity and access, and customer engagement and support solutions. It enables people to connect with each other worldwide to drive meaningful interactions, deepen relationships, and create better outcomes for individuals and businesses.

Read More: What does a market perform rating mean? 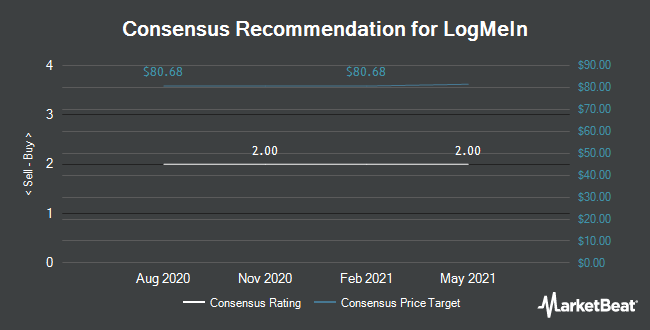 Receive News & Ratings for LogMeIn Daily - Enter your email address below to receive a concise daily summary of the latest news and analysts' ratings for LogMeIn and related companies with MarketBeat.com's FREE daily email newsletter.

Orange Given a €12.50 Price Target at Berenberg Bank

Engie Given a €13.00 Price Target by Berenberg Bank Analysts

Airbus Given a €87.00 Price Target at Credit Suisse Group

Signify Given a €25.00 Price Target by Berenberg Bank Analysts