Complete the form below to receive the latest headlines and analysts' recommendations for Toll Brothers with our free daily email newsletter:

Toll Brothers (NYSE:TOL) released its quarterly earnings results on Tuesday. The construction company reported $0.41 earnings per share for the quarter, missing analysts’ consensus estimates of $0.45 by ($0.04), Bloomberg Earnings reports. Toll Brothers had a return on equity of 10.63% and a net margin of 7.44%. The firm had revenue of $1.33 billion during the quarter, compared to analyst estimates of $1.42 billion.

In related news, Director Christine Garvey sold 16,954 shares of Toll Brothers stock in a transaction dated Friday, January 3rd. The stock was sold at an average price of $40.76, for a total transaction of $691,045.04. Following the completion of the sale, the director now owns 3,335 shares in the company, valued at approximately $135,934.60. The transaction was disclosed in a document filed with the SEC, which is available at the SEC website. 10.94% of the stock is owned by company insiders. 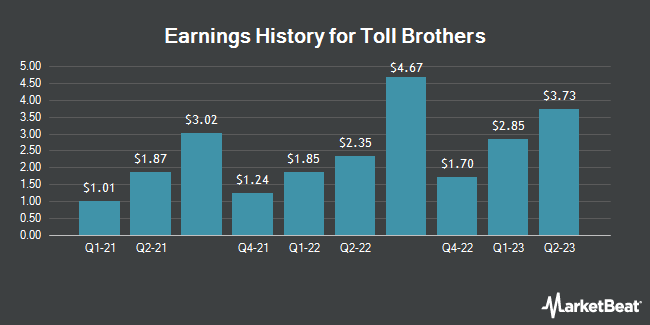