Complete the form below to receive the latest headlines and analysts' recommendations for Nexa Resources with our free daily email newsletter:

Nexa Resources (NYSE:NEXA) last released its earnings results on Thursday, February 13th. The company reported $0.17 earnings per share for the quarter, topping the Thomson Reuters’ consensus estimate of ($0.14) by $0.31. Nexa Resources had a negative net margin of 6.29% and a positive return on equity of 0.76%. The company had revenue of $585.80 million during the quarter, compared to the consensus estimate of $562.00 million. As a group, analysts predict that Nexa Resources SA will post -0.8 EPS for the current year.

The firm also recently declared an annual dividend, which will be paid on Monday, March 30th. Stockholders of record on Monday, March 16th will be issued a $0.3775 dividend. This represents a dividend yield of 6%. The ex-dividend date is Friday, March 13th. Nexa Resources’s dividend payout ratio (DPR) is presently 88.89%.

Nexa Resources SA, through its subsidiaries, engages in the zinc mining and smelting business. It also produces copper, lead, silver, and gold deposits. The company owns and operates five mines, including three located in the Central Andes of Peru; and two located in the state of Minas Gerais in Brazil.

Featured Article: How big is the FinTech market?

Want to see what other hedge funds are holding NEXA? Visit HoldingsChannel.com to get the latest 13F filings and insider trades for Nexa Resources SA (NYSE:NEXA). 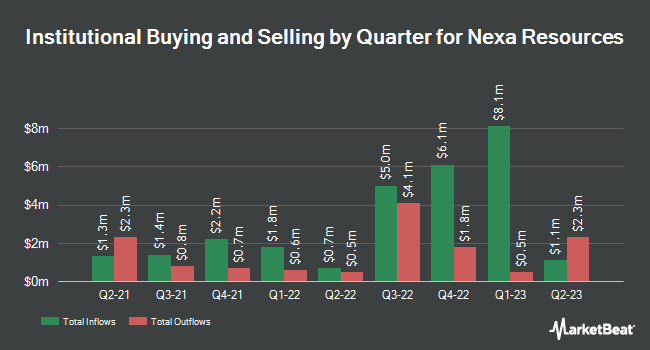 Deutsche Telekom Given a €15.50 Price Target at Independent Research