Complete the form below to receive the latest headlines and analysts' recommendations for Cubic with our free daily email newsletter:

Cubic (NYSE:CUB) had its target price raised by JPMorgan Chase & Co. from $56.00 to $61.00 in a report issued on Tuesday morning, The Fly reports. The brokerage currently has an overweight rating on the scientific and technical instruments company’s stock.

Cubic (NYSE:CUB) last announced its quarterly earnings results on Wednesday, August 5th. The scientific and technical instruments company reported $0.74 earnings per share (EPS) for the quarter, beating analysts’ consensus estimates of $0.58 by $0.16. The firm had revenue of $350.44 million for the quarter, compared to the consensus estimate of $379.81 million. Cubic had a positive return on equity of 5.96% and a negative net margin of 1.30%. On average, sell-side analysts anticipate that Cubic will post 2.58 earnings per share for the current year.

The company also recently declared a semi-annual dividend, which was paid on Wednesday, September 9th. Shareholders of record on Monday, August 31st were issued a dividend of $0.135 per share. This represents a yield of 0.6%. The ex-dividend date of this dividend was Friday, August 28th. Cubic’s dividend payout ratio is presently 8.63%.

In other Cubic news, CEO Bradley H. Feldmann sold 5,000 shares of the firm’s stock in a transaction that occurred on Friday, June 26th. The stock was sold at an average price of $45.85, for a total transaction of $229,250.00. Following the completion of the transaction, the chief executive officer now owns 53,961 shares in the company, valued at approximately $2,474,111.85. The transaction was disclosed in a document filed with the Securities & Exchange Commission, which is accessible through this link. Company insiders own 0.58% of the company’s stock.

Further Reading: What is the Coverage Ratio? 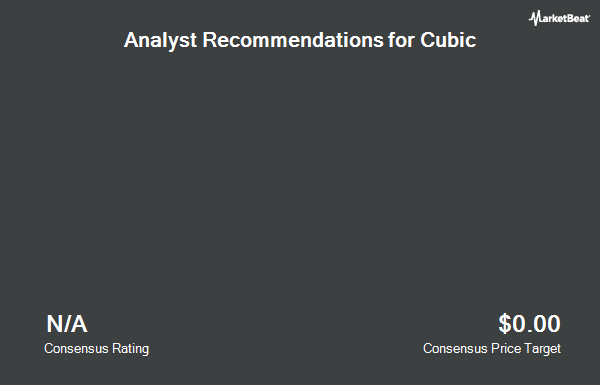 Receive News & Ratings for Cubic Daily - Enter your email address below to receive a concise daily summary of the latest news and analysts' ratings for Cubic and related companies with MarketBeat.com's FREE daily email newsletter.