Complete the form below to receive the latest headlines and analysts' recommendations for Fastenal with our free daily email newsletter:

Fastenal (NASDAQ:FAST) had its price target decreased by Deutsche Bank Aktiengesellschaft from $54.00 to $52.00 in a research report released on Wednesday, The Fly reports.

A number of other brokerages have also commented on FAST. Morgan Stanley lifted their price target on shares of Fastenal from $46.00 to $47.00 and gave the stock an equal weight rating in a report on Wednesday. Wells Fargo & Company downgraded Fastenal from an overweight rating to an equal weight rating and set a $50.00 target price on the stock. in a report on Thursday, September 3rd. They noted that the move was a valuation call. JPMorgan Chase & Co. raised Fastenal from an underweight rating to a neutral rating and set a $34.00 price target for the company in a research note on Tuesday, June 23rd. Raymond James lowered Fastenal from a market perform rating to an underperform rating in a research note on Friday, September 4th. Finally, Jefferies Financial Group reiterated a hold rating and issued a $46.00 target price on shares of Fastenal in a report on Wednesday, July 15th. Two analysts have rated the stock with a sell rating, nine have issued a hold rating and four have given a buy rating to the stock. The company has a consensus rating of Hold and a consensus target price of $44.36.

Fastenal (NASDAQ:FAST) last released its quarterly earnings data on Sunday, October 18th. The company reported $0.38 earnings per share (EPS) for the quarter, beating the Thomson Reuters’ consensus estimate of $0.37 by $0.01. Fastenal had a return on equity of 31.19% and a net margin of 15.07%. The company had revenue of $1.41 billion during the quarter, compared to the consensus estimate of $1.40 billion. During the same quarter in the prior year, the firm posted $0.37 earnings per share. The firm’s revenue was up 2.5% compared to the same quarter last year. As a group, analysts predict that Fastenal will post 1.46 earnings per share for the current fiscal year.

Recommended Story: How Investors Use a Balance Sheet 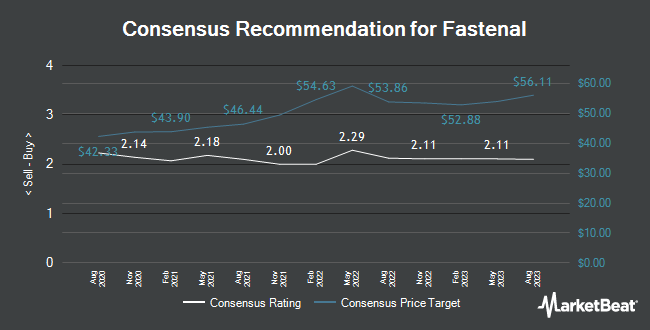 Receive News & Ratings for Fastenal Daily - Enter your email address below to receive a concise daily summary of the latest news and analysts' ratings for Fastenal and related companies with MarketBeat.com's FREE daily email newsletter.