Complete the form below to receive the latest headlines and analysts' recommendations for Texas Roadhouse with our free daily email newsletter:

Texas Roadhouse (NASDAQ:TXRH) had its price objective increased by Morgan Stanley from $56.00 to $67.00 in a research note issued to investors on Wednesday morning, Analyst Ratings Network reports. They currently have an equal weight rating on the restaurant operator’s stock.

Texas Roadhouse (NASDAQ:TXRH) last announced its earnings results on Monday, August 3rd. The restaurant operator reported ($0.48) earnings per share for the quarter, beating analysts’ consensus estimates of ($0.62) by $0.14. The business had revenue of $476.43 million during the quarter, compared to analyst estimates of $474.75 million. Texas Roadhouse had a net margin of 2.46% and a return on equity of 6.79%. The company’s quarterly revenue was down 30.9% compared to the same quarter last year. During the same period in the previous year, the business earned $0.63 EPS. As a group, research analysts forecast that Texas Roadhouse will post 0.32 EPS for the current fiscal year.

Further Reading: How Do Front-End Loads Impact an Investment? 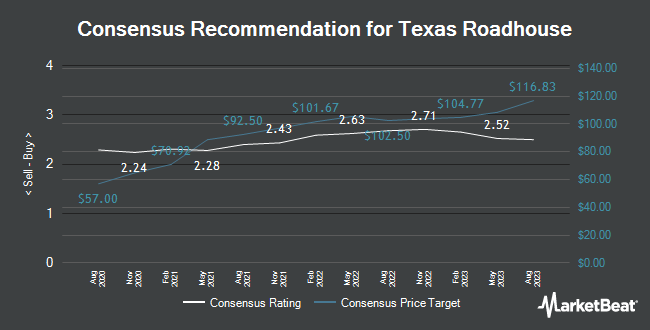