Complete the form below to receive the latest headlines and analysts' recommendations for Biogen with our free daily email newsletter:

Factory Mutual Insurance Co. trimmed its position in Biogen Inc. (NASDAQ:BIIB) by 21.1% during the third quarter, according to the company in its most recent 13F filing with the Securities and Exchange Commission (SEC). The fund owned 40,000 shares of the biotechnology company’s stock after selling 10,700 shares during the period. Factory Mutual Insurance Co.’s holdings in Biogen were worth $11,347,000 as of its most recent SEC filing.

Biogen (NASDAQ:BIIB) last announced its quarterly earnings data on Wednesday, July 22nd. The biotechnology company reported $10.26 EPS for the quarter, topping the Zacks’ consensus estimate of $8.03 by $2.23. Biogen had a return on equity of 50.10% and a net margin of 40.91%. The company had revenue of $3.68 billion during the quarter, compared to the consensus estimate of $3.44 billion. During the same quarter last year, the company earned $9.15 EPS. Sell-side analysts forecast that Biogen Inc. will post 34.64 earnings per share for the current fiscal year.

Several research analysts recently weighed in on the stock. Wells Fargo & Company boosted their target price on shares of Biogen from $311.00 to $324.00 and gave the company an “equal weight” rating in a research note on Wednesday, July 22nd. Mizuho reissued a “hold” rating and set a $316.00 price target on shares of Biogen in a research report on Wednesday, July 22nd. Morgan Stanley decreased their price target on Biogen from $357.00 to $355.00 and set an “overweight” rating for the company in a research note on Tuesday, October 13th. Credit Suisse Group raised Biogen from a “neutral” rating to an “outperform” rating and upped their target price for the company from $270.00 to $375.00 in a report on Friday, August 7th. Finally, Oppenheimer raised their price target on Biogen from $325.00 to $360.00 and gave the stock an “outperform” rating in a research note on Friday, August 7th. Six research analysts have rated the stock with a sell rating, sixteen have issued a hold rating and eleven have given a buy rating to the stock. The company presently has a consensus rating of “Hold” and an average target price of $311.82. 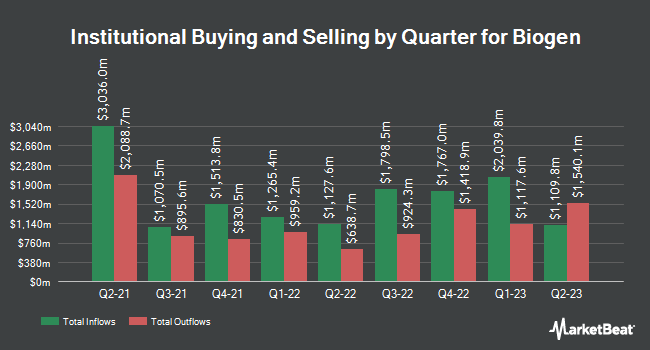 Receive News & Ratings for Biogen Daily - Enter your email address below to receive a concise daily summary of the latest news and analysts' ratings for Biogen and related companies with MarketBeat.com's FREE daily email newsletter.