Complete the form below to receive the latest headlines and analysts' recommendations for SI-Bone with our free daily email newsletter:

Ritholtz Wealth Management bought a new stake in shares of SI-Bone Inc (NASDAQ:SIBN) during the 3rd quarter, according to the company in its most recent disclosure with the Securities & Exchange Commission. The fund bought 10,712 shares of the company’s stock, valued at approximately $254,000.

SI-Bone (NASDAQ:SIBN) last issued its earnings results on Monday, August 3rd. The company reported ($0.44) earnings per share for the quarter, beating the consensus estimate of ($0.64) by $0.20. The company had revenue of $14.05 million during the quarter, compared to analysts’ expectations of $9.48 million. SI-Bone had a negative return on equity of 51.27% and a negative net margin of 68.27%. Sell-side analysts expect that SI-Bone Inc will post -1.61 EPS for the current year.

SI-BONE, Inc, a medical device company, develops and commercializes a proprietary minimally invasive surgical implant system in the United States and Internationally. It offers iFuse, an implant system to fuse the sacroiliac joint to treat sacroiliac joint dysfunction that causes lower back pain. The company was founded in 2008 and is headquartered in Santa Clara, California.

Want to see what other hedge funds are holding SIBN? Visit HoldingsChannel.com to get the latest 13F filings and insider trades for SI-Bone Inc (NASDAQ:SIBN). 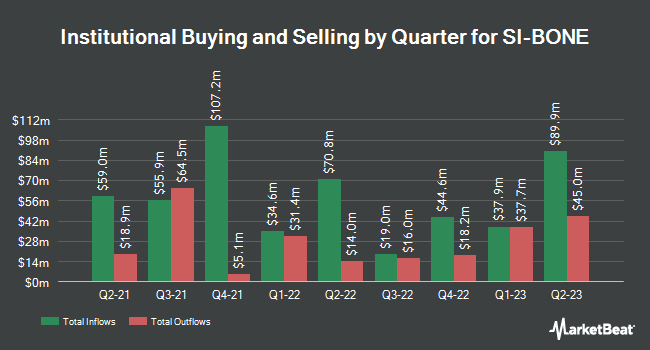 Receive News & Ratings for SI-Bone Daily - Enter your email address below to receive a concise daily summary of the latest news and analysts' ratings for SI-Bone and related companies with MarketBeat.com's FREE daily email newsletter.