Complete the form below to receive the latest headlines and analysts' recommendations for IQVIA with our free daily email newsletter:

IQVIA (NYSE:IQV) last issued its quarterly earnings results on Tuesday, October 20th. The medical research company reported $1.63 EPS for the quarter, topping the consensus estimate of $1.52 by $0.11. IQVIA had a net margin of 1.61% and a return on equity of 18.03%. The firm had revenue of $2.79 billion for the quarter, compared to analysts’ expectations of $2.75 billion. During the same period in the previous year, the business earned $1.60 earnings per share. IQVIA’s revenue for the quarter was up .6% compared to the same quarter last year. As a group, equities analysts anticipate that IQVIA Holdings Inc. will post 5.86 EPS for the current year.

In related news, Director John G. Danhakl bought 63,451 shares of the company’s stock in a transaction dated Wednesday, December 23rd. The stock was purchased at an average price of $176.95 per share, for a total transaction of $11,227,654.45. The purchase was disclosed in a legal filing with the SEC, which is accessible through the SEC website. Also, Director Ronald A. Rittenmeyer sold 9,590 shares of IQVIA stock in a transaction that occurred on Tuesday, November 24th. The stock was sold at an average price of $172.96, for a total value of $1,658,686.40. Following the completion of the transaction, the director now owns 11,894 shares of the company’s stock, valued at approximately $2,057,186.24. The disclosure for this sale can be found here. Insiders own 1.40% of the company’s stock.

Featured Article: How much can an individual set aside as a catch-up contribution?

Want to see what other hedge funds are holding IQV? Visit HoldingsChannel.com to get the latest 13F filings and insider trades for IQVIA Holdings Inc. (NYSE:IQV). 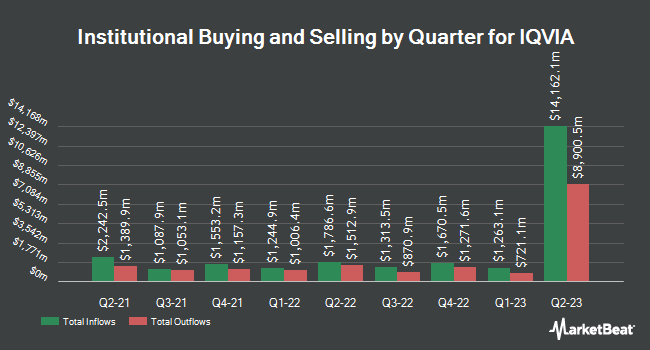 Receive News & Ratings for IQVIA Daily - Enter your email address below to receive a concise daily summary of the latest news and analysts' ratings for IQVIA and related companies with MarketBeat.com's FREE daily email newsletter.