Complete the form below to receive the latest headlines and analysts' recommendations for Cadence Design Systems with our free daily email newsletter:

Bank of America downgraded shares of Cadence Design Systems (NASDAQ:CDNS) from a buy rating to an underperform rating in a report issued on Monday, AnalystRatings.net reports.

Cadence Design Systems (NASDAQ:CDNS) last released its earnings results on Monday, October 19th. The software maker reported $0.70 EPS for the quarter, beating the Thomson Reuters’ consensus estimate of $0.61 by $0.09. Cadence Design Systems had a return on equity of 48.31% and a net margin of 42.68%. The company had revenue of $667.00 million during the quarter, compared to analysts’ expectations of $642.29 million. During the same period in the prior year, the business posted $0.54 EPS. The business’s revenue was up 15.2% on a year-over-year basis. As a group, equities analysts predict that Cadence Design Systems will post 2.02 earnings per share for the current fiscal year. 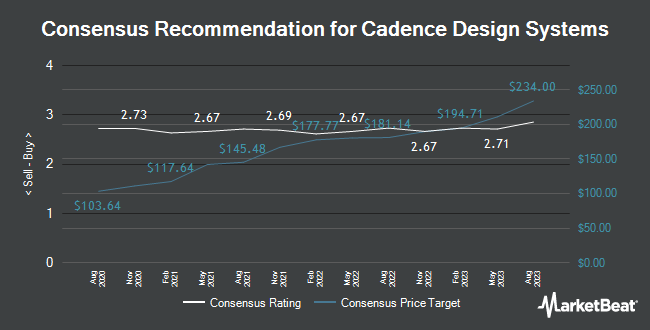 Zalando SE Given a €111.00 Price Target by The Goldman Sachs Group Analysts

KION GROUP AG Given a €68.00 Price Target at Morgan Stanley

AIXTRON SE Given a €15.50 Price Target at Barclays