Complete the form below to receive the latest headlines and analysts' recommendations for SYNNEX with our free daily email newsletter:

SYNNEX (NYSE:SNX) had its target price lifted by research analysts at Raymond James from $80.00 to $100.00 in a research report issued on Tuesday, AR Network reports. The brokerage presently has a “strong-buy” rating on the business services provider’s stock. Raymond James’ price target would suggest a potential upside of 16.71% from the company’s previous close.

SYNNEX (NYSE:SNX) last released its quarterly earnings results on Sunday, January 10th. The business services provider reported $5.21 earnings per share for the quarter, beating analysts’ consensus estimates of $3.83 by $1.38. SYNNEX had a net margin of 2.06% and a return on equity of 16.78%. The business had revenue of $7.41 billion for the quarter, compared to analysts’ expectations of $6.60 billion. During the same period last year, the business earned $4.26 EPS. The company’s revenue was up 12.7% compared to the same quarter last year. On average, research analysts forecast that SYNNEX will post 12.25 EPS for the current year. 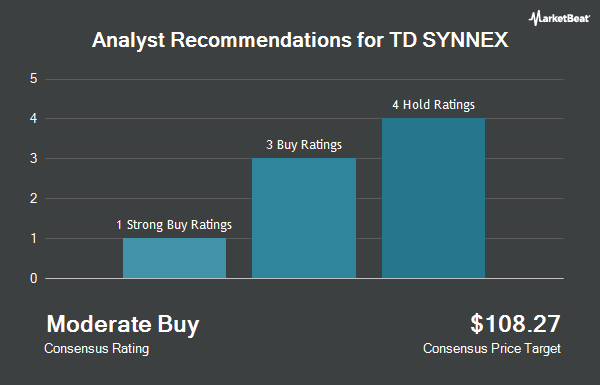 Receive News & Ratings for SYNNEX Daily - Enter your email address below to receive a concise daily summary of the latest news and analysts' ratings for SYNNEX and related companies with MarketBeat.com's FREE daily email newsletter.

BASF SE Given a €77.00 Price Target by Warburg Research Analysts

Rogers Given a CHF 350 Price Target at Credit Suisse Group

ASML Given a €430.00 Price Target by UBS Group Analysts