Complete the form below to receive the latest headlines and analysts' recommendations for Lemonade with our free daily email newsletter:

Lemonade, Inc. (NYSE:LMND) Given Average Rating of “Hold” by Analysts

Lemonade (NYSE:LMND) last released its earnings results on Tuesday, March 2nd. The company reported ($0.60) earnings per share (EPS) for the quarter, beating the Zacks’ consensus estimate of ($0.65) by $0.05. The business had revenue of $20.50 million during the quarter, compared to analyst estimates of $19.22 million. The firm’s quarterly revenue was down 12.8% on a year-over-year basis. As a group, analysts anticipate that Lemonade will post -4.36 earnings per share for the current year.

Lemonade, Inc provides various insurance products in the United States and Europe. Its insurance products cover stolen or damaged property, and personal liability that protects its customers if they are responsible for an accident or damage to another person or their property. The company also offers landlord insurance policies to condo and co-op owners who rent out their property to protect their real and personal properties.

Featured Story: How can you know how many shares are floating? 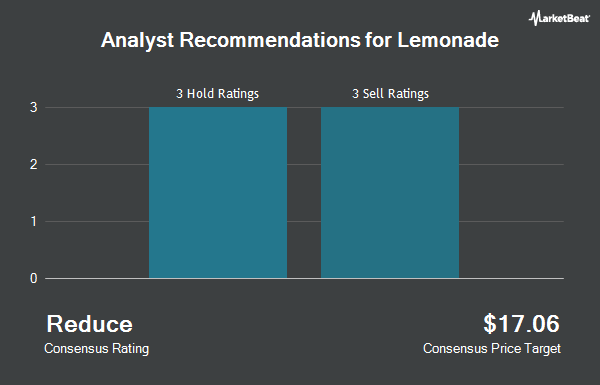 Receive News & Ratings for Lemonade Daily - Enter your email address below to receive a concise daily summary of the latest news and analysts' ratings for Lemonade and related companies with MarketBeat.com's FREE daily email newsletter.

Daimler Given a €92.00 Price Target by JPMorgan Chase & Co. Analysts

Brenntag Given a €90.00 Price Target by The Goldman Sachs Group Analysts