Complete the form below to receive the latest headlines and analysts' recommendations for SuRo Capital with our free daily email newsletter:

SuRo Capital Corp. (NASDAQ:SSSS) major shareholder Robert S. Birch sold 111,000 shares of the business’s stock in a transaction dated Monday, April 5th. The shares were sold at an average price of $14.23, for a total value of $1,579,530.00. Following the completion of the sale, the insider now directly owns 2,515,496 shares of the company’s stock, valued at $35,795,508.08. The sale was disclosed in a legal filing with the SEC, which is available through this link. Large shareholders that own 10% or more of a company’s shares are required to disclose their transactions with the SEC.

SuRo Capital (NASDAQ:SSSS) last issued its quarterly earnings data on Tuesday, March 9th. The company reported $2.81 EPS for the quarter, topping analysts’ consensus estimates of $0.53 by $2.28. The firm had revenue of $0.92 million during the quarter. SuRo Capital had a negative return on equity of 6.27% and a net margin of 1,249.39%.

The business also recently disclosed a monthly dividend, which will be paid on Thursday, April 15th. Shareholders of record on Tuesday, March 30th will be issued a dividend of $0.25 per share. This represents a $3.00 dividend on an annualized basis and a yield of 20.51%. The ex-dividend date is Monday, March 29th.

Sutter Rock Capital Corp. is specializing in growth capital, B round and beyond, emerging growth, and pre-IPO investments in late stage venture-backed private companies. It makes direct (primary rounds) investments in companies and also makes secondary direct investments. The fund operates as a Business development Company.

Further Reading: How to build a Fibonacci channel 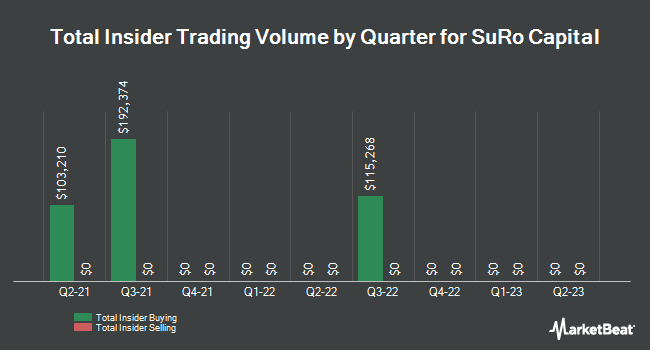