Complete the form below to receive the latest headlines and analysts' recommendations for ACADIA Pharmaceuticals with our free daily email newsletter:

Shares of ACADIA Pharmaceuticals Inc. (NASDAQ:ACAD) have received an average rating of “Hold” from the twenty-one ratings firms that are covering the company, Marketbeat.com reports. One equities research analyst has rated the stock with a sell recommendation, twelve have given a hold recommendation and seven have issued a buy recommendation on the company. The average 12 month price target among brokers that have issued ratings on the stock in the last year is $33.71.

ACADIA Pharmaceuticals Inc, a biopharmaceutical company, focuses on the development and commercialization of small molecule drugs that address unmet medical needs in central nervous system disorders. The company offers NUPLAZID (pimavanserin) for the treatment of hallucinations and delusions associated with Parkinson's disease psychosis; Trofinetide, a novel synthetic analog for the treatment of Rett syndrome; ACP-044, a novel first-in-class orally administered non-opioid analgesic for treating acute and chronic pain; and ACP-319, a positive allosteric modulator of the muscarinic receptor for treating cognition and schizophrenia.

Featured Story: How to Invest in Stocks with Increasing Dividends 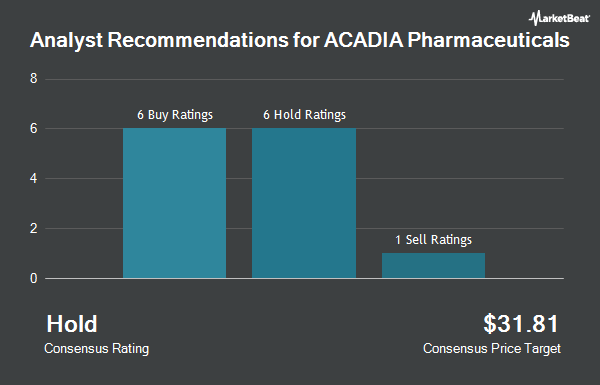