Complete the form below to receive the latest headlines and analysts' recommendations for Louisiana-Pacific with our free daily email newsletter:

Louisiana-Pacific (NYSE:LPX) last announced its quarterly earnings data on Monday, February 15th. The building manufacturing company reported $2.01 EPS for the quarter, topping the Zacks’ consensus estimate of $1.74 by $0.27. Louisiana-Pacific had a return on equity of 26.04% and a net margin of 7.79%. The firm had revenue of $860.00 million during the quarter, compared to analyst estimates of $790.00 million. Equities analysts forecast that Louisiana-Pacific will post 3.98 earnings per share for the current fiscal year.

The firm also recently disclosed a quarterly dividend, which was paid on Monday, March 8th. Stockholders of record on Monday, February 22nd were paid a $0.16 dividend. This is a boost from Louisiana-Pacific’s previous quarterly dividend of $0.15. The ex-dividend date of this dividend was Friday, February 19th. This represents a $0.64 dividend on an annualized basis and a dividend yield of 0.96%. Louisiana-Pacific’s dividend payout ratio is currently 172.97%.

Louisiana-Pacific Corporation, together with its subsidiaries, manufactures and markets building products primarily for use in new home construction, repair and remodeling, and outdoor structure markets. It operates through four segments: Siding; Oriented Strand Board (OSB); Engineered Wood Products (EWP); and South America. 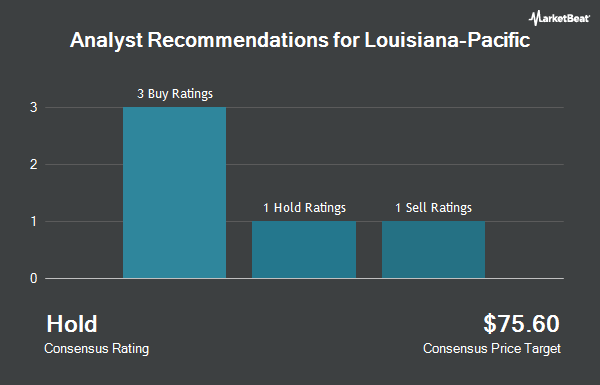