Complete the form below to receive the latest headlines and analysts' recommendations for Duke Energy with our free daily email newsletter:

Duke Energy Co. (NYSE:DUK) has received an average recommendation of “Hold” from the twelve ratings firms that are covering the firm, MarketBeat reports. Eight research analysts have rated the stock with a hold recommendation and three have issued a buy recommendation on the company. The average 1 year price objective among brokerages that have covered the stock in the last year is $101.09.

Duke Energy (NYSE:DUK) last released its quarterly earnings data on Wednesday, February 10th. The utilities provider reported $1.03 earnings per share for the quarter, hitting the consensus estimate of $1.03. Duke Energy had a return on equity of 8.28% and a net margin of 8.68%. The business had revenue of $5.78 billion during the quarter, compared to analyst estimates of $6.22 billion. On average, analysts anticipate that Duke Energy will post 5.09 EPS for the current year.

In other Duke Energy news, SVP Dwight L. Jacobs sold 1,802 shares of the firm’s stock in a transaction that occurred on Tuesday, February 23rd. The shares were sold at an average price of $89.35, for a total value of $161,008.70. Following the sale, the senior vice president now owns 5,794 shares in the company, valued at $517,693.90. The sale was disclosed in a document filed with the Securities & Exchange Commission, which is accessible through this link. Company insiders own 0.11% of the company’s stock. 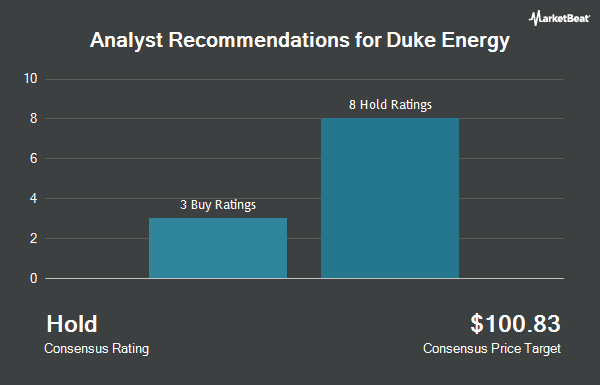