Complete the form below to receive the latest headlines and analysts' recommendations for Kansas City Southern with our free daily email newsletter:

Kansas City Southern (NYSE:KSU) was downgraded by equities research analysts at Raymond James from a “strong-buy” rating to an “outperform” rating in a research report issued on Monday, Briefing.com reports. They presently have a $286.00 target price on the transportation company’s stock, up from their previous target price of $255.00. Raymond James’ price objective suggests a potential upside of 11.06% from the stock’s previous close.

Kansas City Southern, a transportation holding company, provides domestic and international rail transportation services in North America. The company serves a ten-state region in the Midwest and southeast regions of the United States and has the shortest north/south rail route between Kansas City, Missouri, and ports along the Gulf of Mexico in Alabama, Louisiana, Mississippi, and Texas.

See Also: Does a trade war provide a risk to the global economy? 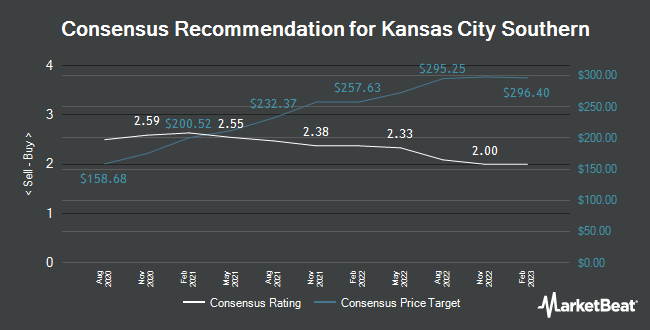