Complete the form below to receive the latest headlines and analysts' recommendations for Materialise with our free daily email newsletter:

KBC Group NV lifted its holdings in shares of Materialise NV (NASDAQ:MTLS) by 7.1% in the first quarter, Holdings Channel.com reports. The institutional investor owned 144,445 shares of the software maker’s stock after acquiring an additional 9,570 shares during the period. KBC Group NV’s holdings in Materialise were worth $5,193,000 at the end of the most recent reporting period.

Materialise (NASDAQ:MTLS) last released its quarterly earnings results on Thursday, April 29th. The software maker reported ($0.07) EPS for the quarter, missing analysts’ consensus estimates of ($0.02) by ($0.05). Materialise had a negative net margin of 2.06% and a negative return on equity of 2.68%. As a group, analysts forecast that Materialise NV will post -0.11 earnings per share for the current fiscal year.

Materialise NV provides additive manufacturing and medical software, and 3D printing services in Europe, the Americas, Europe and Africa, and the Asia-Pacific. The company's Materialise Software segment offers software through programs and platforms that enable and enhance the functionality of 3D printers and of 3D printing operations.

Want to see what other hedge funds are holding MTLS? Visit HoldingsChannel.com to get the latest 13F filings and insider trades for Materialise NV (NASDAQ:MTLS). 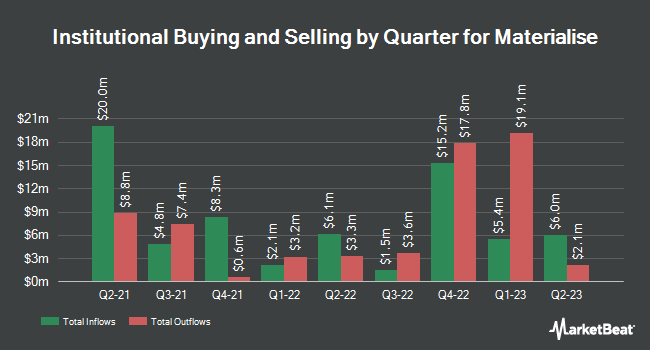