Complete the form below to receive the latest headlines and analysts' recommendations for Root with our free daily email newsletter:

Zacks Investment Research downgraded shares of Root (NASDAQ:ROOT) from a buy rating to a hold rating in a research note issued to investors on Saturday morning, Zacks.com reports.

According to Zacks, “Root Inc. is the parent company of Root Insurance Company. It is a technology company revolutionizing personal insurance with a pricing model. Root Inc. is based in COLUMBUS, Ohio. “

Root (NASDAQ:ROOT) last announced its quarterly earnings data on Thursday, February 25th. The company reported ($0.72) EPS for the quarter, beating the Thomson Reuters’ consensus estimate of ($0.76) by $0.04. The company had revenue of $50.90 million during the quarter, compared to analyst estimates of $49.30 million. Research analysts forecast that Root will post -4.47 EPS for the current fiscal year.

In related news, CTO Daniel Manges sold 36,427 shares of the stock in a transaction that occurred on Monday, March 15th. The stock was sold at an average price of $11.09, for a total value of $403,975.43. Following the transaction, the chief technology officer now owns 1,000 shares in the company, valued at $11,090. The transaction was disclosed in a filing with the Securities & Exchange Commission, which is available at this link.

Root, Inc provides insurance products and services in the United States. The company offers auto, homeowners, and renters insurance products. The company operates a direct-to-consumer model and serves customers primarily through mobile applications, as well as through its website. Its direct distribution channels also cover digital, media, and referral channels, as well as distribution partners. 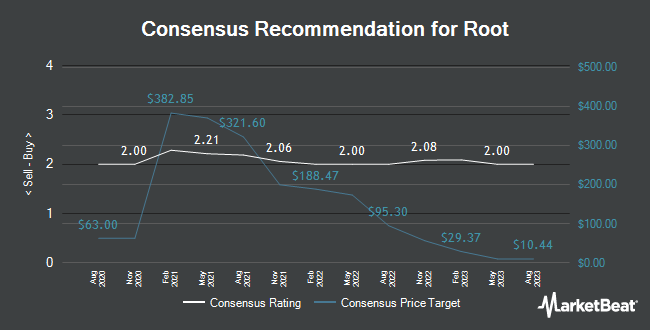 Receive News & Ratings for Root Daily - Enter your email address below to receive a concise daily summary of the latest news and analysts' ratings for Root and related companies with MarketBeat.com's FREE daily email newsletter.

Airbus Given a €103.00 Price Target by Independent Research Analysts

Klöckner & Co SE Given a €11.50 Price Target at Independent Research

Infineon Technologies Given a €39.00 Price Target by Barclays Analysts