Zacks Investment Research cut shares of Trupanion (NASDAQ:TRUP) from a hold rating to a strong sell rating in a report released on Saturday morning, Zacks.com reports.

According to Zacks, “Trupanion, Inc. operates as a direct-to-consumer monthly subscription service provider of a medical insurance plan for cats and dogs. It operates primarily in Canada, Puerto Rico, and the United States. The Company serves pet owners and veterinarians. Trupanion, Inc. is headquartered in Seattle, Washington. “

Trupanion (NASDAQ:TRUP) last released its quarterly earnings data on Thursday, April 29th. The financial services provider reported ($0.31) EPS for the quarter, missing the Thomson Reuters’ consensus estimate of ($0.08) by ($0.23). Trupanion had a negative net margin of 0.37% and a negative return on equity of 1.22%. As a group, equities research analysts expect that Trupanion will post -0.09 earnings per share for the current year.

Trupanion, Inc, together with its subsidiaries, provides medical insurance for cats and dogs on monthly subscription basis in the United States, Canada, Puerto Rico, and Australia. The company operates through Subscription Business and Other Business segments. It serves pet owners and veterinarians. The company was formerly known as Vetinsurance International, Inc changed its name to Trupanion, Inc in 2013. 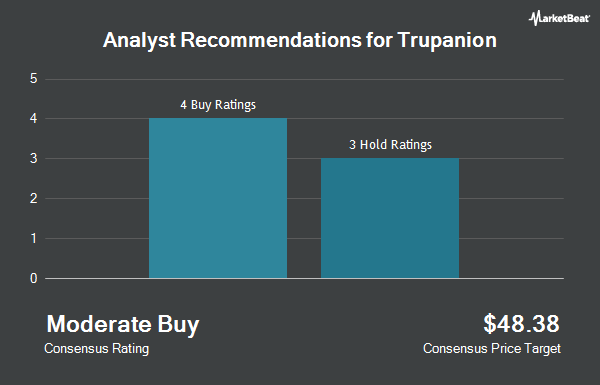 Airbus Given a €103.00 Price Target by Independent Research Analysts

Klöckner & Co SE Given a €11.50 Price Target at Independent Research

Infineon Technologies Given a €39.00 Price Target by Barclays Analysts