Zumiez Inc. (NASDAQ:ZUMZ) insider Chris K. Visser sold 1,851 shares of the company’s stock in a transaction on Tuesday, June 8th. The shares were sold at an average price of $49.53, for a total transaction of $91,680.03. Following the completion of the sale, the insider now owns 10,023 shares of the company’s stock, valued at approximately $496,439.19. The transaction was disclosed in a filing with the SEC, which can be accessed through this link.

Zumiez (NASDAQ:ZUMZ) last announced its quarterly earnings results on Wednesday, June 2nd. The apparel and footwear maker reported $1.03 earnings per share for the quarter, beating the Thomson Reuters’ consensus estimate of $0.04 by $0.99. Zumiez had a net margin of 7.69% and a return on equity of 15.92%. The business had revenue of $279.07 million during the quarter, compared to analysts’ expectations of $221.85 million. During the same quarter in the prior year, the company posted ($0.84) EPS. The firm’s revenue for the quarter was up 102.6% compared to the same quarter last year. As a group, equities research analysts predict that Zumiez Inc. will post 3.19 earnings per share for the current fiscal year.

A number of equities analysts have issued reports on the company. Pivotal Research increased their target price on Zumiez from $45.00 to $49.00 and gave the stock a “hold” rating in a report on Tuesday, March 9th. B. Riley increased their price objective on shares of Zumiez from $55.00 to $65.00 and gave the stock a “buy” rating in a research note on Friday, June 4th. Finally, Zacks Investment Research upgraded shares of Zumiez from a “hold” rating to a “strong-buy” rating and set a $56.00 target price for the company in a research note on Tuesday. Two investment analysts have rated the stock with a hold rating, one has issued a buy rating and one has issued a strong buy rating to the company. Zumiez currently has a consensus rating of “Buy” and an average price target of $51.25.

Zumiez Inc, together with its subsidiaries, operates as a specialty retailer of apparel, footwear, accessories, and hardgoods for young men and women. Its hardgoods include skateboards, snowboards, bindings, components, and other equipment. As of March 6, 2021, the company operated 722 stores, including 602 stores in the United States, 52 stores in Canada, 54 stores in Europe, and 14 stores in Australia under the names of Zumiez, Blue Tomato, and Fast Times.

Recommended Story: What do I need to know about analyst ratings? 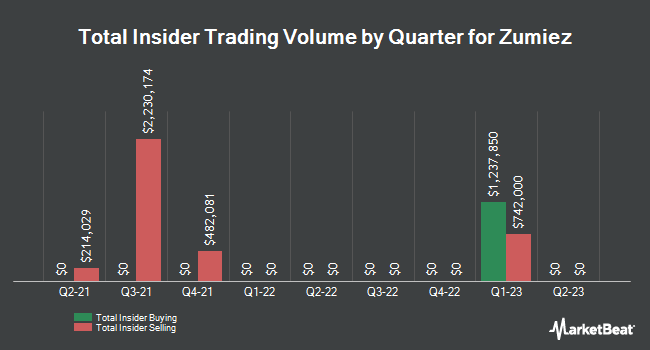 Receive News & Ratings for Zumiez Daily - Enter your email address below to receive a concise daily summary of the latest news and analysts' ratings for Zumiez and related companies with MarketBeat.com's FREE daily email newsletter.

Macy’s, Inc. Given Average Rating of “Hold” by Analysts

Euronet Worldwide, Inc. Given Consensus Rating of “Buy” by Brokerages

Complete the form below to receive the latest headlines and analysts' recommendations for Zumiez with our free daily email newsletter: