Wall Street analysts expect Gladstone Commercial Co. (NASDAQ:GOOD) to announce $34.90 million in sales for the current fiscal quarter, Zacks Investment Research reports. Two analysts have issued estimates for Gladstone Commercial’s earnings, with estimates ranging from $34.71 million to $35.10 million. Gladstone Commercial reported sales of $33.14 million during the same quarter last year, which would suggest a positive year over year growth rate of 5.3%. The firm is expected to issue its next quarterly earnings report on Thursday, November 4th.

On average, analysts expect that Gladstone Commercial will report full year sales of $138.90 million for the current fiscal year, with estimates ranging from $138.70 million to $139.10 million. For the next fiscal year, analysts forecast that the firm will post sales of $149.30 million, with estimates ranging from $147.10 million to $151.51 million. Zacks Investment Research’s sales averages are an average based on a survey of research firms that follow Gladstone Commercial.

Gladstone Commercial (NASDAQ:GOOD) last posted its earnings results on Sunday, August 8th. The real estate investment trust reported ($0.08) EPS for the quarter, missing the Thomson Reuters’ consensus estimate of ($0.06) by ($0.02). The company had revenue of $33.37 million for the quarter, compared to the consensus estimate of $34.47 million. Gladstone Commercial had a return on equity of 6.68% and a net margin of 10.40%.

The firm also recently disclosed a monthly dividend, which will be paid on Thursday, September 30th. Shareholders of record on Wednesday, September 22nd will be given a $0.1252 dividend. The ex-dividend date is Tuesday, September 21st. This represents a $1.50 annualized dividend and a yield of 7.01%. Gladstone Commercial’s payout ratio is 95.54%.

Gladstone Commercial Corp. is a real estate investment trust, which engages in the acquisition, managing and ownership of office and industrial properties. Its portfolio consists of single-tenant commercial and industrial real properties. The company was founded by David John Gladstone on February 14, 2003 and is headquartered in McLean, VA.

Featured Article: What is a dead cat bounce? 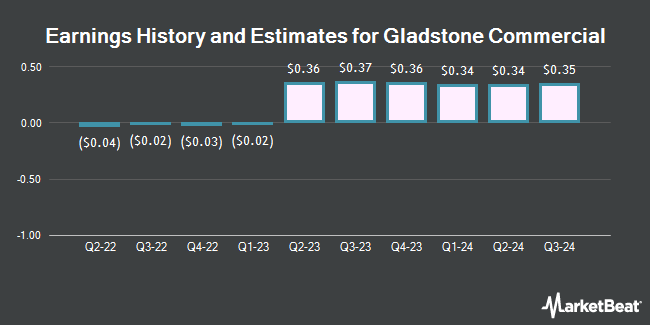 Complete the form below to receive the latest headlines and analysts' recommendations for Gladstone Commercial with our free daily email newsletter: