Wall Street brokerages expect MannKind Co. (NASDAQ:MNKD) to report sales of $20.54 million for the current quarter, Zacks reports. Three analysts have provided estimates for MannKind’s earnings, with estimates ranging from $19.40 million to $21.11 million. MannKind posted sales of $15.35 million in the same quarter last year, which would indicate a positive year-over-year growth rate of 33.8%. The firm is scheduled to issue its next quarterly earnings results on Wednesday, November 3rd.

MannKind (NASDAQ:MNKD) last posted its quarterly earnings results on Tuesday, August 10th. The biopharmaceutical company reported ($0.05) earnings per share (EPS) for the quarter, missing the consensus estimate of ($0.04) by ($0.01). The firm had revenue of $23.28 million for the quarter, compared to the consensus estimate of $17.76 million. During the same quarter in the prior year, the business posted ($0.05) earnings per share.

MNKD has been the subject of several recent research reports. HC Wainwright reiterated a “buy” rating and issued a $6.00 price target on shares of MannKind in a research report on Monday, August 23rd. Zacks Investment Research downgraded MannKind from a “hold” rating to a “sell” rating in a research note on Tuesday, August 17th. One equities research analyst has rated the stock with a sell rating, one has issued a hold rating and five have assigned a buy rating to the stock. Based on data from MarketBeat.com, MannKind currently has a consensus rating of “Buy” and an average target price of $6.20.

MannKind Corp. operates as a biopharmaceutical company. It focuses on the discovery, development and commercialization of therapeutic products for diseases, such as diabetes and cancer. The company was founded by Alfred E. Mann on February 14, 1991 and is headquartered in Westlake Village, CA. 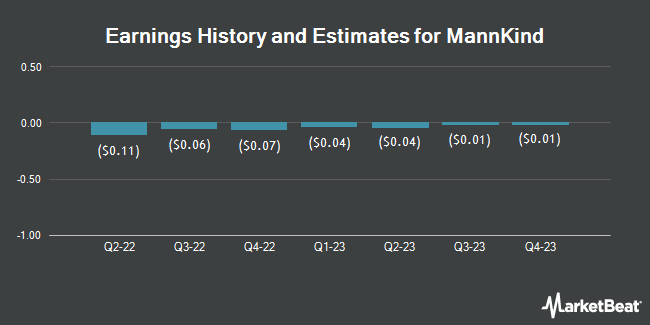 Receive News & Ratings for MannKind Daily - Enter your email address below to receive a concise daily summary of the latest news and analysts' ratings for MannKind and related companies with MarketBeat.com's FREE daily email newsletter.

FOX Upgraded to “B-” by TheStreet

Complete the form below to receive the latest headlines and analysts' recommendations for MannKind with our free daily email newsletter: