Alnylam Pharmaceuticals, Inc. (NASDAQ:ALNY) has earned a consensus rating of “Buy” from the thirteen ratings firms that are presently covering the stock, MarketBeat Ratings reports. Six research analysts have rated the stock with a hold rating and seven have given a buy rating to the company. The average twelve-month price target among brokerages that have issued ratings on the stock in the last year is $180.09.

Alnylam Pharmaceuticals, Inc operates as biopharmaceutical company, which engages in the discovery, development and commercialization of RNAi therapeutics. The firm’s products include ONPATTRO, GIVLAARI, and OXLUMO. It is the translation of RNAi as a new class of innovative medicines with a core focus on RNAi therapeutics for the treatment of genetically defined diseases. 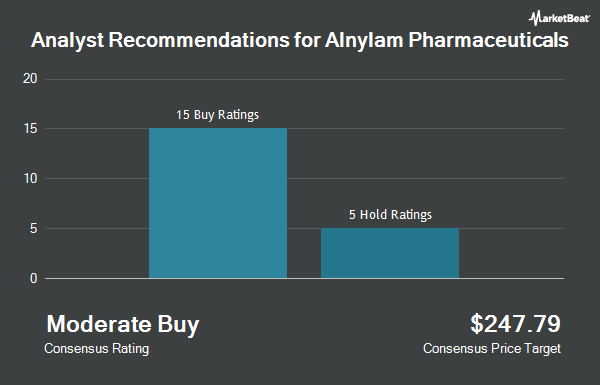 -$0.04 Earnings Per Share Expected for MRC Global Inc. This Quarter

SonoCoin Trading Up 17.1% Over Last Week

Complete the form below to receive the latest headlines and analysts' recommendations for Alnylam Pharmaceuticals with our free daily email newsletter: