Willis Investment Counsel lessened its holdings in shares of Blue Bird Co. (NASDAQ:BLBD) by 23.0% during the 2nd quarter, according to its most recent disclosure with the SEC. The fund owned 110,264 shares of the company’s stock after selling 32,984 shares during the period. Willis Investment Counsel’s holdings in Blue Bird were worth $2,741,000 at the end of the most recent reporting period.

Several equities analysts recently issued reports on BLBD shares. Roth Capital decreased their price target on Blue Bird from $25.00 to $21.00 and set a “neutral” rating on the stock in a report on Friday, August 13th. Zacks Investment Research upgraded Blue Bird from a “strong sell” rating to a “hold” rating in a report on Monday, October 4th.

Blue Bird (NASDAQ:BLBD) last released its earnings results on Wednesday, August 11th. The company reported $0.19 earnings per share for the quarter, missing the consensus estimate of $0.43 by ($0.24). Blue Bird had a net margin of 1.82% and a negative return on equity of 35.68%. The company had revenue of $196.66 million during the quarter, compared to analyst estimates of $245.00 million. As a group, research analysts anticipate that Blue Bird Co. will post 0.34 earnings per share for the current year.

In related news, CEO Phil Horlock bought 5,000 shares of the business’s stock in a transaction on Thursday, August 19th. The shares were purchased at an average price of $20.26 per share, with a total value of $101,300.00. Following the completion of the purchase, the chief executive officer now owns 432,475 shares of the company’s stock, valued at approximately $8,761,943.50. The acquisition was disclosed in a filing with the SEC, which is available at this hyperlink. Corporate insiders own 2.60% of the company’s stock.

Blue Bird Corp. engages in the design and manufacture of school buses. It operates through the Bus and Parts business segments. The Bus segment includes the manufacturing and assembly of school buses to be sold to a variety of customers across the United States, Canada, and in international markets. The Parts segment provides routine maintenance, replacement of parts that are damaged in service, and replacement of parts that suffer from wear and tear.

Want to see what other hedge funds are holding BLBD? Visit HoldingsChannel.com to get the latest 13F filings and insider trades for Blue Bird Co. (NASDAQ:BLBD). 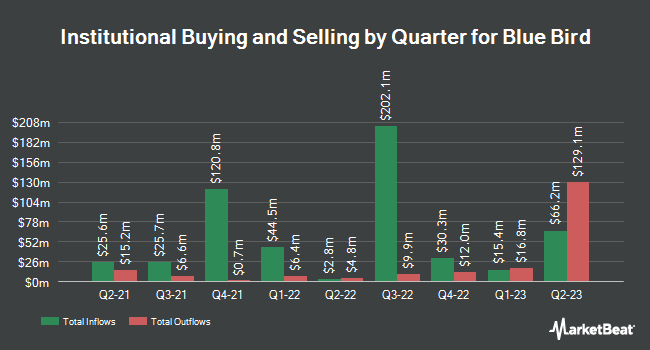 Complete the form below to receive the latest headlines and analysts' recommendations for Blue Bird with our free daily email newsletter: