Eagle Asset Management Inc. decreased its position in shares of Camping World Holdings, Inc. (NYSE:CWH – Get Rating) by 10.9% during the 4th quarter, according to its most recent disclosure with the SEC. The firm owned 270,003 shares of the company’s stock after selling 33,057 shares during the period. Eagle Asset Management Inc. owned 0.31% of Camping World worth $11,032,000 as of its most recent SEC filing.

Camping World (NYSE:CWH – Get Rating) last announced its quarterly earnings data on Tuesday, May 3rd. The company reported $1.15 earnings per share for the quarter, missing the consensus estimate of $1.33 by ($0.18). The company had revenue of $1.66 billion for the quarter, compared to analyst estimates of $1.64 billion. Camping World had a return on equity of 109.12% and a net margin of 3.72%. Camping World’s revenue was up 6.7% on a year-over-year basis. During the same period in the prior year, the business earned $1.40 earnings per share. On average, sell-side analysts expect that Camping World Holdings, Inc. will post 4.18 EPS for the current year.

The firm also recently declared a quarterly dividend, which will be paid on Wednesday, June 29th. Stockholders of record on Tuesday, June 14th will be given a $0.625 dividend. The ex-dividend date is Monday, June 13th. This represents a $2.50 dividend on an annualized basis and a dividend yield of 9.59%. Camping World’s payout ratio is currently 44.56%.

About Camping World (Get Rating)

Camping World Holdings, Inc, through its subsidiaries, retails recreational vehicles (RVs), and related products and services. It operates in two segments, Good Sam Services and Plans; and RV and Outdoor Retail. The company provides a portfolio of services, protection plans, products, and resources in the RV industry.

Want to see what other hedge funds are holding CWH? Visit HoldingsChannel.com to get the latest 13F filings and insider trades for Camping World Holdings, Inc. (NYSE:CWH – Get Rating). 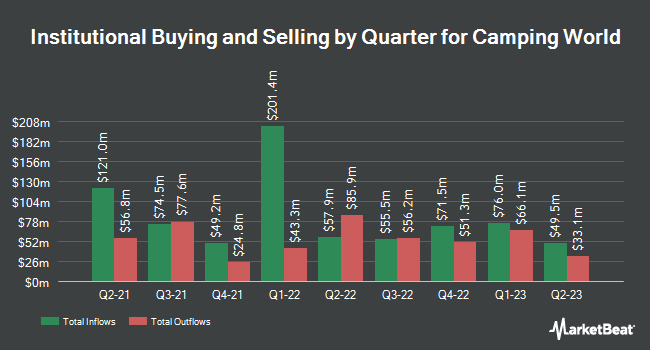 Complete the form below to receive the latest headlines and analysts' recommendations for Camping World with our free daily email newsletter: