Public Employees Retirement Association of Colorado reduced its holdings in shares of Enanta Pharmaceuticals, Inc. (NASDAQ:ENTA – Get Rating) by 17.2% during the 4th quarter, according to the company in its most recent 13F filing with the SEC. The institutional investor owned 9,919 shares of the biotechnology company’s stock after selling 2,063 shares during the period. Public Employees Retirement Association of Colorado’s holdings in Enanta Pharmaceuticals were worth $742,000 at the end of the most recent reporting period.

Enanta Pharmaceuticals, Inc, a biotechnology company, discovers and develops small molecule drugs for the treatment of viral infections and liver diseases. Its research and development disease targets include respiratory syncytial virus, SARS-CoV-2, human metapneumovirus, and hepatitis B virus. The company has a collaborative development and license agreement with Abbott Laboratories to identify, develop, and commercialize HCV NS3 and NS3/4A protease inhibitor compounds, including paritaprevir and glecaprevir for the treatment of chronic hepatitis C virus.

Want to see what other hedge funds are holding ENTA? Visit HoldingsChannel.com to get the latest 13F filings and insider trades for Enanta Pharmaceuticals, Inc. (NASDAQ:ENTA – Get Rating). 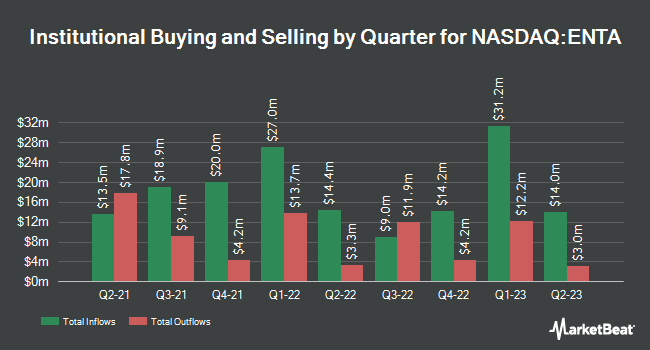 Complete the form below to receive the latest headlines and analysts' recommendations for Enanta Pharmaceuticals with our free daily email newsletter: