Frontier Group (NASDAQ:ULCC – Get Rating) had its price target cut by Evercore ISI from $20.00 to $15.00 in a research note issued to investors on Monday morning, The Fly reports. They currently have an outperform rating on the stock.

A number of other analysts also recently issued reports on ULCC. Deutsche Bank Aktiengesellschaft reissued a buy rating and set a $20.00 target price on shares of Frontier Group in a research report on Friday, April 29th. Raymond James raised Frontier Group from a market perform rating to an outperform rating and set a $14.00 target price on the stock in a research report on Thursday, June 23rd. Ten research analysts have rated the stock with a buy rating, According to data from MarketBeat, Frontier Group currently has an average rating of Buy and a consensus price target of $18.96.

Frontier Group (NASDAQ:ULCC – Get Rating) last released its quarterly earnings data on Thursday, April 28th. The company reported ($0.50) EPS for the quarter, missing the consensus estimate of ($0.37) by ($0.13). The business had revenue of $605.00 million during the quarter, compared to analysts’ expectations of $611.66 million. Frontier Group had a negative return on equity of 45.52% and a negative net margin of 5.51%. Frontier Group’s quarterly revenue was up .0% on a year-over-year basis. During the same quarter in the prior year, the firm earned ($0.86) earnings per share. On average, research analysts expect that Frontier Group will post -0.01 EPS for the current fiscal year.

About Frontier Group (Get Rating)

Frontier Group Holdings, Inc, a low-fare airline company, provides air transportation for passengers. The company operates an airline that serves approximately 120 airports throughout the United States and international destinations in the Americas. It offers its services through direct distribution channels, including its website, mobile app, and call center. 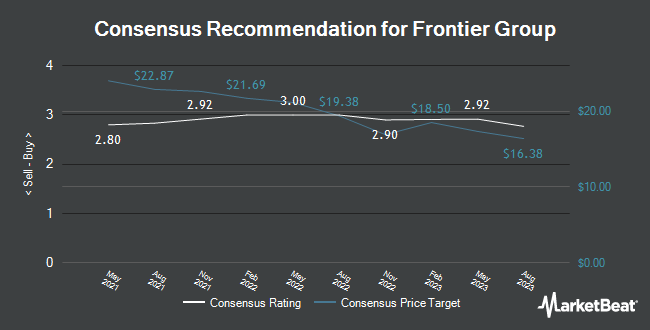 Civilization Price Down 14% Over Last Week

Complete the form below to receive the latest headlines and analysts' recommendations for Frontier Group with our free daily email newsletter: