Sandvik AB (publ) (OTCMKTS:SDVKY – Get Rating) had its target price cut by equities research analysts at Deutsche Bank Aktiengesellschaft from SEK 260 to SEK 230 in a report released on Tuesday, The Fly reports.

Sandvik AB (publ) (OTCMKTS:SDVKY – Get Rating) last released its quarterly earnings results on Wednesday, April 20th. The industrial products company reported $0.29 earnings per share for the quarter, missing the consensus estimate of $0.32 by ($0.03). Sandvik AB (publ) had a return on equity of 19.12% and a net margin of 15.11%. The firm had revenue of $2.67 billion for the quarter. On average, equities research analysts expect that Sandvik AB will post 1.29 earnings per share for the current fiscal year.

Sandvik AB (publ) operates as an engineering company in the areas of mining and rock excavation, rock processing, manufacturing and machining, and materials technology in Sweden and internationally. The company offers mining and rock solutions, including drill rigs, underground loaders and trucks, rock drills and other tools, and parts and services, as well as digital and sustainability solutions; and rock processing applications, which include crushing, screening, feeding, breaking, demolition, and recycling. 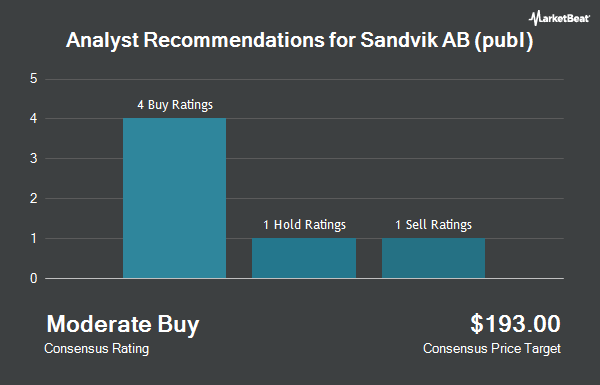 Rhythm Pharmaceuticals Raised to “Buy” at The Goldman Sachs Group

Complete the form below to receive the latest headlines and analysts' recommendations for Sandvik AB (publ) with our free daily email newsletter: