MetLife (NYSE:MET – Get Rating) had its target price dropped by investment analysts at Evercore ISI from $81.00 to $80.00 in a report released on Wednesday, The Fly reports. Evercore ISI’s price target indicates a potential upside of 28.33% from the company’s previous close.

MetLife (NYSE:MET – Get Rating) last posted its quarterly earnings results on Wednesday, May 4th. The financial services provider reported $2.08 EPS for the quarter, topping analysts’ consensus estimates of $1.63 by $0.45. MetLife had a return on equity of 12.04% and a net margin of 9.63%. The company had revenue of $17.72 billion during the quarter, compared to analysts’ expectations of $16.81 billion. During the same quarter in the previous year, the firm earned $2.20 EPS. MetLife’s revenue was up 6.1% on a year-over-year basis. On average, research analysts forecast that MetLife will post 7.56 earnings per share for the current year.

MetLife announced that its Board of Directors has approved a stock repurchase plan on Wednesday, May 4th that allows the company to buyback $3.00 billion in outstanding shares. This buyback authorization allows the financial services provider to reacquire up to 5.3% of its stock through open market purchases. Stock buyback plans are often an indication that the company’s board of directors believes its shares are undervalued.

About MetLife (Get Rating) 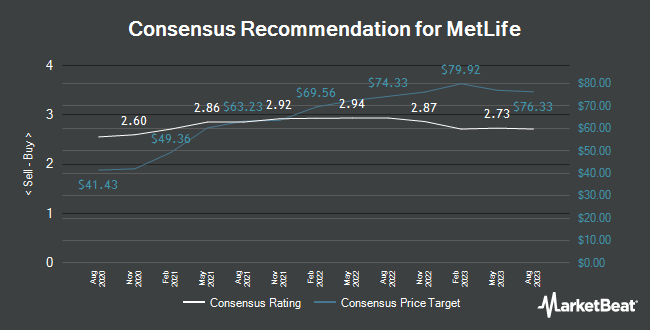 Receive News & Ratings for MetLife Daily - Enter your email address below to receive a concise daily summary of the latest news and analysts' ratings for MetLife and related companies with MarketBeat.com's FREE daily email newsletter.

Complete the form below to receive the latest headlines and analysts' recommendations for MetLife with our free daily email newsletter: