Insmed (NASDAQ:INSM – Get Rating) posted its quarterly earnings data on Thursday. The biopharmaceutical company reported ($0.80) earnings per share for the quarter, topping the consensus estimate of ($0.89) by $0.09, Briefing.com reports. Insmed had a negative return on equity of 108.20% and a negative net margin of 217.35%. The business had revenue of $65.20 million during the quarter, compared to analysts’ expectations of $58.92 million. During the same quarter in the previous year, the firm earned ($0.94) EPS. The firm’s revenue was up 43.6% compared to the same quarter last year. Insmed updated its FY 2022 guidance to EPS.

Insider Buying and Selling at Insmed

Institutional Investors Weigh In On Insmed

Insmed Incorporated is a global biopharmaceutical company on a mission to transform the lives of patients with serious and rare diseases. Insmed’s first commercial product is ARIKAYCE® (amikacin liposome inhalation suspension), which is approved in the United States for the treatment of Mycobacterium avium complex (MAC) lung disease as part of a combination antibacterial drug regimen for adult patients with limited or no alternative treatment options. 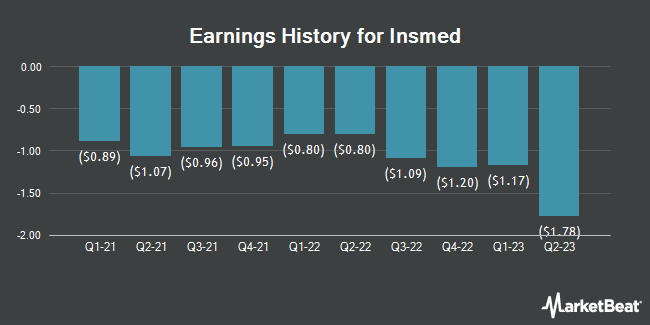 Receive News & Ratings for Insmed Daily - Enter your email address below to receive a concise daily summary of the latest news and analysts' ratings for Insmed and related companies with MarketBeat.com's FREE daily email newsletter.

DeRace Trading Down 17.7% This Week

Stronghold Token Trading Down 15.6% This Week

Complete the form below to receive the latest headlines and analysts' recommendations for Insmed with our free daily email newsletter: