Kellogg (NYSE:K – Get Rating) issued its earnings results on Thursday. The company reported $1.18 EPS for the quarter, beating analysts’ consensus estimates of $1.05 by $0.13, Briefing.com reports. Kellogg had a return on equity of 34.82% and a net margin of 10.81%. The firm had revenue of $3.86 billion for the quarter, compared to the consensus estimate of $3.64 billion. During the same quarter in the previous year, the company posted $1.14 earnings per share. The business’s quarterly revenue was up 8.7% compared to the same quarter last year. Kellogg updated its FY22 guidance to $4.24 EPS and its FY 2022 guidance to $4.12-$4.12 EPS.

The firm also recently disclosed a quarterly dividend, which will be paid on Thursday, September 15th. Investors of record on Thursday, September 1st will be given a dividend of $0.59 per share. This represents a $2.36 annualized dividend and a dividend yield of 3.14%. The ex-dividend date of this dividend is Wednesday, August 31st. This is a boost from Kellogg’s previous quarterly dividend of $0.58. Kellogg’s payout ratio is currently 51.67%.

Insider Buying and Selling at Kellogg

Hedge Funds Weigh In On Kellogg 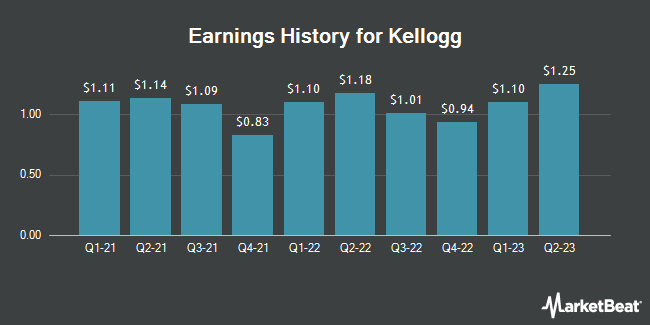 Receive News & Ratings for Kellogg Daily - Enter your email address below to receive a concise daily summary of the latest news and analysts' ratings for Kellogg and related companies with MarketBeat.com's FREE daily email newsletter.

HNI Lowered to Buy at StockNews.com

Complete the form below to receive the latest headlines and analysts' recommendations for Kellogg with our free daily email newsletter: