OGE Energy (NYSE:OGE – Get Rating) announced its quarterly earnings data on Thursday. The utilities provider reported $0.36 earnings per share for the quarter, missing the consensus estimate of $0.43 by ($0.07), Briefing.com reports. The firm had revenue of $791.00 million for the quarter, compared to analyst estimates of $607.65 million. OGE Energy had a return on equity of 17.73% and a net margin of 36.90%. OGE Energy’s revenue for the quarter was up 37.0% compared to the same quarter last year. During the same period in the previous year, the business posted $0.56 EPS. OGE Energy updated its FY22 guidance to $1.87-1.97 EPS.

The firm also recently announced a quarterly dividend, which was paid on Friday, July 29th. Shareholders of record on Monday, July 11th were paid a $0.41 dividend. The ex-dividend date was Friday, July 8th. This represents a $1.64 dividend on an annualized basis and a yield of 4.07%. OGE Energy’s payout ratio is 34.17%.

OGE Energy Corp., together with its subsidiaries, operates as an energy and energy services provider that offers physical delivery and related services for electricity, natural gas, crude oil, and natural gas liquids in the United States. The company generates, transmits, distributes, and sells electric energy. 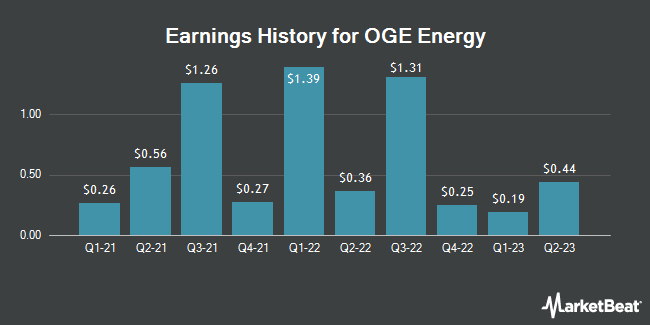 Complete the form below to receive the latest headlines and analysts' recommendations for OGE Energy with our free daily email newsletter: