Kodiak Sciences (NASDAQ:KOD – Get Rating) issued its earnings results on Tuesday. The company reported ($1.74) earnings per share for the quarter, meeting analysts’ consensus estimates of ($1.74), Briefing.com reports. During the same period last year, the firm posted ($1.08) earnings per share.

In other news, Director Bros. Advisors Lp Baker acquired 122,100 shares of the stock in a transaction that occurred on Monday, May 16th. The stock was purchased at an average cost of $5.72 per share, with a total value of $698,412.00. Following the completion of the acquisition, the director now directly owns 14,843,809 shares in the company, valued at $84,906,587.48. The acquisition was disclosed in a filing with the Securities & Exchange Commission, which is accessible through this hyperlink. Over the last ninety days, insiders have acquired 816,015 shares of company stock valued at $5,670,730. 42.60% of the stock is currently owned by insiders. 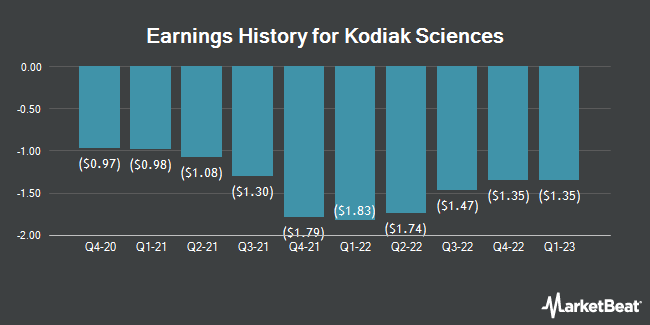 Complete the form below to receive the latest headlines and analysts' recommendations for Kodiak Sciences with our free daily email newsletter: