GitLab (NASDAQ:GTLB – Get Rating) last issued its quarterly earnings data on Tuesday, September 6th. The company reported ($0.15) earnings per share (EPS) for the quarter, topping analysts’ consensus estimates of ($0.23) by $0.08. The business had revenue of $101.00 million during the quarter, compared to analyst estimates of $94.44 million. GitLab had a negative return on equity of 20.93% and a negative net margin of 51.69%. GitLab’s revenue for the quarter was up 73.8% compared to the same quarter last year. On average, sell-side analysts anticipate that GitLab will post -1.4 earnings per share for the current year.

A number of brokerages have recently commented on GTLB. Cowen increased their price objective on GitLab to $70.00 in a research report on Tuesday, September 6th. Scotiabank initiated coverage on shares of GitLab in a research report on Wednesday, June 8th. They set an outperform rating and a $62.00 target price on the stock. The Goldman Sachs Group raised GitLab from a neutral rating to a buy rating and lifted their target price for the stock from $69.00 to $80.00 in a research report on Monday, June 27th. Piper Sandler raised their price target on shares of GitLab from $60.00 to $67.00 in a report on Wednesday, July 13th. Finally, JPMorgan Chase & Co. initiated coverage on shares of GitLab in a report on Thursday, September 1st. They issued a neutral rating and a $63.00 price target for the company. One research analyst has rated the stock with a hold rating and twelve have issued a buy rating to the company’s stock. According to data from MarketBeat.com, the company presently has a consensus rating of Moderate Buy and a consensus target price of $80.46.

GitLab Inc, through its subsidiaries, develops software for the software development lifecycle in the United States, Europe, and the Asia Pacific. The company offers GitLab, a DevOps platform, which is a single application that leads to faster cycle time and allows visibility throughout and control over various stages of the DevOps lifecycle. 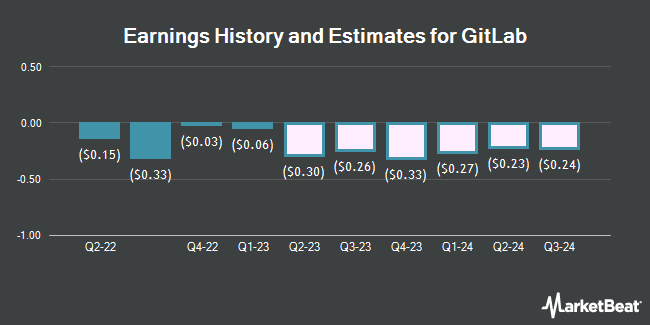 Receive News & Ratings for GitLab Daily - Enter your email address below to receive a concise daily summary of the latest news and analysts' ratings for GitLab and related companies with MarketBeat.com's FREE daily email newsletter.

Complete the form below to receive the latest headlines and analysts' recommendations for GitLab with our free daily email newsletter: