The firm also recently declared a quarterly dividend, which will be paid on Sunday, January 1st. Stockholders of record on Friday, December 2nd will be paid a $0.44 dividend. The ex-dividend date is Thursday, December 1st. This represents a $1.76 annualized dividend and a dividend yield of 2.30%. This is a boost from Imperial Oil’s previous quarterly dividend of $0.34. Imperial Oil’s payout ratio is currently 13.23%.

Imperial Oil Limited engages in exploration, production, and sale of crude oil and natural gas in Canada. The company operates through three segments: Upstream, Downstream and Chemical segments. The Upstream segment explores for, and produces crude oil, natural gas, synthetic oil, and bitumen. As of December 31, 2021, this segment had 386 million oil-equivalent barrels of proved undeveloped reserves. 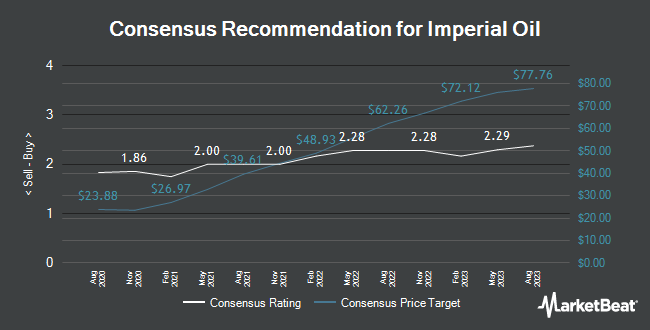 GMS Upgraded to Strong-Buy at StockNews.com

CSX Upgraded by StockNews.com to Buy

Tejon Ranch Upgraded to “B+” at TheStreet

Complete the form below to receive the latest headlines and analysts' recommendations for Imperial Oil with our free daily email newsletter: