Cullen/Frost Bankers (NYSE:CFR – Get Rating) had its price target decreased by investment analysts at Truist Financial from $160.00 to $148.00 in a research report issued to clients and investors on Friday, The Fly reports. Truist Financial’s price target indicates a potential upside of 7.46% from the company’s previous close.

In related news, EVP Bobby Berman sold 1,941 shares of the stock in a transaction that occurred on Friday, October 28th. The stock was sold at an average price of $151.62, for a total value of $294,294.42. Following the completion of the transaction, the executive vice president now directly owns 24,589 shares in the company, valued at $3,728,184.18. The sale was disclosed in a document filed with the Securities & Exchange Commission, which is available at this hyperlink. 3.76% of the stock is currently owned by company insiders. 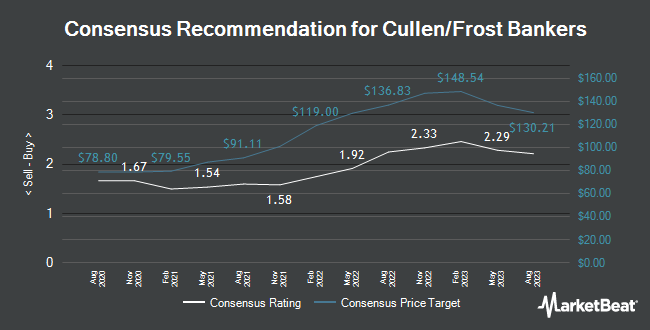 Complete the form below to receive the latest headlines and analysts' recommendations for Cullen/Frost Bankers with our free daily email newsletter: