Dark Forest Capital Management LP lifted its stake in shares of Pilgrim’s Pride Co. (NASDAQ:PPC – Get Rating) by 621.0% during the 2nd quarter, according to its most recent disclosure with the Securities and Exchange Commission (SEC). The firm owned 4,874 shares of the company’s stock after buying an additional 4,198 shares during the quarter. Dark Forest Capital Management LP’s holdings in Pilgrim’s Pride were worth $152,000 as of its most recent filing with the Securities and Exchange Commission (SEC).

Pilgrim’s Pride (NASDAQ:PPC – Get Rating) last announced its quarterly earnings results on Wednesday, October 26th. The company reported $1.09 earnings per share for the quarter, beating the consensus estimate of $0.87 by $0.22. The company had revenue of $4.47 billion during the quarter, compared to the consensus estimate of $4.48 billion. Pilgrim’s Pride had a net margin of 5.40% and a return on equity of 38.44%. The firm’s quarterly revenue was up 16.8% compared to the same quarter last year. During the same quarter last year, the firm earned $0.67 earnings per share. Analysts predict that Pilgrim’s Pride Co. will post 3.82 earnings per share for the current fiscal year.

Pilgrim's Pride Corporation engages in the production, processing, marketing and distribution of fresh, frozen and value-added chicken, and pork products to retailers, distributors, and foodservice operators in the United States, the United Kingdom, Mexico, the Middle East, Asia, Continental Europe, and internationally.

Want to see what other hedge funds are holding PPC? Visit HoldingsChannel.com to get the latest 13F filings and insider trades for Pilgrim’s Pride Co. (NASDAQ:PPC – Get Rating). 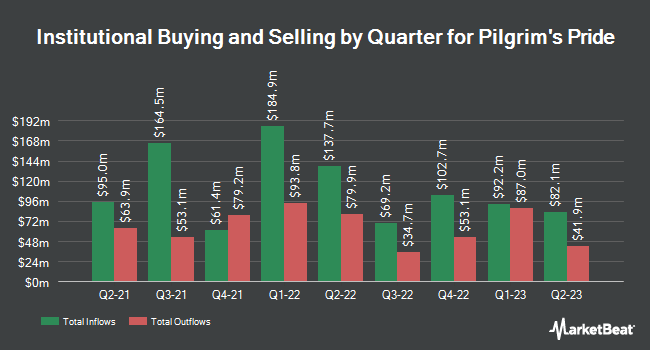 Complete the form below to receive the latest headlines and analysts' recommendations for Pilgrim's Pride with our free daily email newsletter: