Lululemon Athletica (NASDAQ:LULU – Get Rating) had its price target lifted by stock analysts at Piper Sandler from $350.00 to $390.00 in a research report issued on Friday, The Fly reports. Piper Sandler’s price objective suggests a potential upside of 4.14% from the stock’s previous close.

In related news, Director Kathryn Henry sold 189 shares of Lululemon Athletica stock in a transaction that occurred on Monday, September 12th. The shares were sold at an average price of $351.80, for a total transaction of $66,490.20. Following the transaction, the director now owns 4,102 shares of the company’s stock, valued at approximately $1,443,083.60. The transaction was disclosed in a legal filing with the Securities & Exchange Commission, which can be accessed through this hyperlink. 0.46% of the stock is owned by insiders.

lululemon athletica inc., together with its subsidiaries, designs, distributes, and retails athletic apparel and accessories for women and men. It operates in two segments, Company-Operated Stores and Direct to Consumer. The company offers pants, shorts, tops, and jackets for healthy lifestyle and athletic activities, such as yoga, running, and training, as well as other sweaty pursuits. 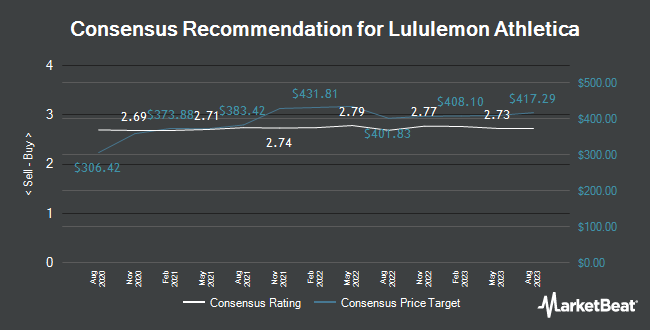 Complete the form below to receive the latest headlines and analysts' recommendations for Lululemon Athletica with our free daily email newsletter: