Penn Capital Management Company LLC grew its holdings in shares of Primerica, Inc. (NYSE:PRI – Get Rating) by 4.8% during the second quarter, according to its most recent Form 13F filing with the SEC. The firm owned 17,185 shares of the financial services provider’s stock after purchasing an additional 780 shares during the period. Penn Capital Management Company LLC’s holdings in Primerica were worth $2,056,000 at the end of the most recent reporting period.

Primerica (NYSE:PRI – Get Rating) last announced its quarterly earnings data on Tuesday, November 8th. The financial services provider reported $3.02 EPS for the quarter, topping analysts’ consensus estimates of $2.94 by $0.08. Primerica had a return on equity of 22.96% and a net margin of 10.01%. The firm had revenue of $673.29 million during the quarter, compared to analyst estimates of $675.99 million. During the same period last year, the company posted $2.98 EPS. The business’s quarterly revenue was down 2.9% compared to the same quarter last year. Equities analysts predict that Primerica, Inc. will post 10.98 earnings per share for the current year.

Primerica announced that its board has authorized a share buyback program on Thursday, August 11th that permits the company to buyback $50.00 million in shares. This buyback authorization permits the financial services provider to repurchase up to 1% of its shares through open market purchases. Shares buyback programs are generally a sign that the company’s board of directors believes its shares are undervalued.

The firm also recently disclosed a quarterly dividend, which will be paid on Wednesday, December 14th. Shareholders of record on Tuesday, November 22nd will be given a dividend of $0.55 per share. The ex-dividend date is Monday, November 21st. This represents a $2.20 dividend on an annualized basis and a yield of 1.55%. Primerica’s payout ratio is presently 31.03%.

Several research analysts recently weighed in on PRI shares. William Blair cut Primerica from an “outperform” rating to a “market perform” rating in a research note on Thursday, November 10th. Morgan Stanley increased their price target on Primerica from $135.00 to $137.00 and gave the company an “equal weight” rating in a research report on Thursday, November 17th. Finally, StockNews.com assumed coverage on Primerica in a research report on Wednesday, October 12th. They issued a “hold” rating for the company. Five investment analysts have rated the stock with a hold rating and two have given a buy rating to the company’s stock. According to data from MarketBeat, the company has an average rating of “Hold” and a consensus price target of $161.40. 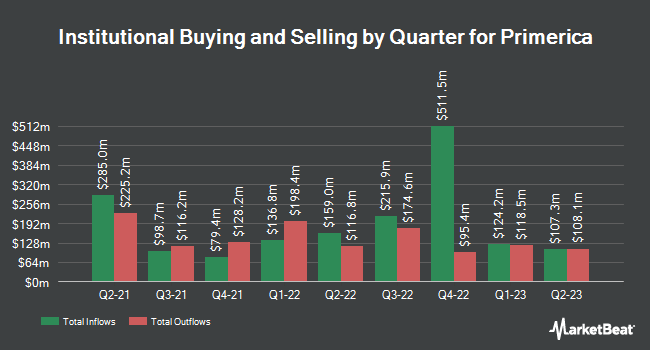 Complete the form below to receive the latest headlines and analysts' recommendations for Primerica with our free daily email newsletter: