GasLog Partners (NYSE:GLOP – Get Rating) will issue its quarterly earnings data before the market opens on Thursday, January 26th. Analysts expect the company to announce earnings of $0.72 per share for the quarter. Parties interested in registering for the company’s conference call can do so using this link.

GasLog Partners (NYSE:GLOP – Get Rating) last announced its quarterly earnings data on Thursday, October 27th. The shipping company reported $0.63 earnings per share for the quarter, topping the consensus estimate of $0.27 by $0.36. The company had revenue of $95.68 million during the quarter, compared to analyst estimates of $75.19 million. GasLog Partners had a net margin of 0.19% and a return on equity of 18.83%. On average, analysts expect GasLog Partners to post $2 EPS for the current fiscal year and $2 EPS for the next fiscal year.

The firm also recently declared a quarterly dividend, which was paid on Thursday, November 10th. Stockholders of record on Monday, November 7th were issued a $0.01 dividend. This represents a $0.04 annualized dividend and a dividend yield of 0.57%. The ex-dividend date was Friday, November 4th. GasLog Partners’s dividend payout ratio (DPR) is presently -10.00%.

Separately, StockNews.com upgraded shares of GasLog Partners from a “buy” rating to a “strong-buy” rating in a research report on Friday, October 28th.

GasLog Partners LP engages in the operation and acquisition of liquefied natural gas carriers. It owns bareboat fleet of LNG carriers including tri-fuel diesel electric engine propulsion and stream vessels, and ships which operates under long-term time charters. The company was founded on January 23, 2014 and is headquartered in Piraeus, Greece. 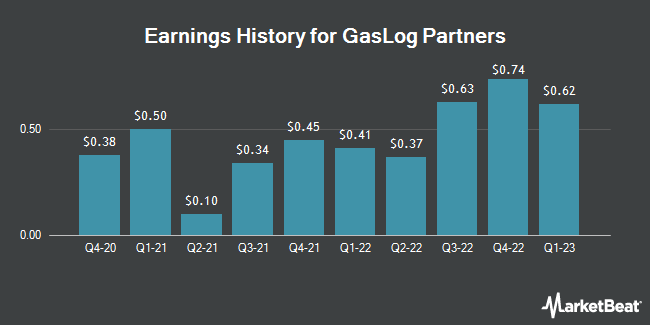 PAX Gold Price Down 2.9% This Week

Complete the form below to receive the latest headlines and analysts' recommendations for GasLog Partners with our free daily email newsletter: