IBM CEO Ginni Rometty Is Backed By Over-tenured Board Members 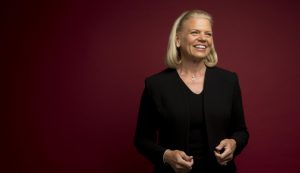 IBM’s current CEO Ginni Rometty and the company’s board members are currently facing some pressure following the report that the company’s revenue has declined for 21 consecutive quarters.

Rometty has manned the helm at IBM for the last five years with the help of five board directors who have reportedly overstayed their tenure. According to a report by a relationship mapping service of TheStreetInc, the five board members have served well beyond the average tenure of boards on other S&P companies. They are now under pressure from investors who are frustrated following the company’s declining stock. Analysts believe that the stock might drop by 18 percent.

“The problem with co-serving on a separate board is that it creates a relationship that may make it more difficult to operate independently,”stated Chares Elson, the John L. Weinberg Center for Corporate Governance at the University of Delaware.

Rometty is currently one of the most popular women in business in the U.S and was the first female CEO at IBM. She has 36 years of experience working at a New York-based company called Armonk. Unfortunately, her stay at IBM seems to be having a dark cloud over it especially due to the declining revenue.Bloomberg Pay Indexclaims that Rometty is the fifth-highest paid CEO in the U.S. A 2017 filing with the Securities and Exchange Commission revealed that she received $32.69 million in total payment in 2016.

Rometty has been receiving assistance in running IBM from three independent directors who she also works with at the Peterson Institute for International Economics. They include James Owens, the former CEO of Caterpillar Inc. (CAT), Andrew Liveris, the chairman and CEO of Dow Chemical Co. and HuthamOlayan, the CEO of Olayan America Corp. Owen is one of the board members whose tenure has been long overdue. He has been a board member since 2006.

Kenneth Chenault, the CEO of American Express Co. happens to be aother board member that has overstayed his tenure alongside Sidney Taurel, the chairman of Eli Lilly & Co. he has been a chairman at IBM for 16 years. Pressure for investors demanding for changes in IBM’s leadership has started to mount up. Some investors feel that it is about time that the company ushers in new board members who might help steer the company towards recovery and restoring the company to its former glory. However, it is not clear whether the current board will yield to the pressure.