Apple Watch Expected To Be Launched In Fall 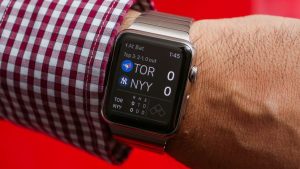 A new model of the Apple Watch, Series 3, is expected to be launched this fall. This is based on reports that one of Apple’s contract manufacturers assigned the responsibility of being the primary manufacturer of the latest version of the Apple Watch, Quanta Computer, has provided earnings guidance indicating profit growth from the production of watches.

Though Apple is yet to officially confirm the expected release date, previous reports had also indicated that the upcoming new version of the Apple Watch would be launched on the same day as the next iPhone. Besides Quanta Computer, Apple will also contract Compal Electronics to manufacture older-generation models of the Apple Watch.

In the upcoming Apple Watch, the design language is expected to remain the same but an improvement in battery life and general performance is expected. Longer battery life would allow the Apple Watch to increase functionalities and extend into areas such as sleep tracking. There have also been rumors that one of the new features would be micro-LED displays which would be incorporated for the purposes of enhancing the quality of the display.

It has also been speculated that some models of the next Apple Watch might possess a SIM card slot in order to allow for cellular data connectivity. Earlier in the year, a semiconductor analyst at Susquehanna Financial Group, Christopher Rolland, reported that cellular connectivity was one of the features that was most requested by users of the Apple smartwatch and therefore the Cupertino, California-based tech giant would honor the request. If the feature is added it will allow the device to operate independently from the iPhone.

Though the wearables sector has witnessed slowing growth in the recent past, Apple has maintained its leading position. This has been attributed partly to the success of Apple Watch 2. A Strategy Analytics’ report indicated that Apple overtook Fitbit in this year’s first quarter to become the biggest player in the wearables sector. In the same quarter the iPhone maker shipped more than 3.5 million units of the Apple Watch compared to the 2.2 million units that were shipped in a similar quarter in 2016.

Another report released by Canalys back in February gave the Apple Watch a 49% share of the smartwatch market, making it the most popular. In the most recent earnings call, Apple’s chief executive officer Tim Cook indicated that the sales of the Apple Watch had been doubled every year.