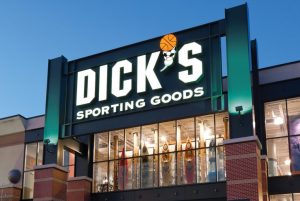 On Tuesday, Dick’s Sporting Goods reported that earnings in its second-quarter did not meet analysts estimates. Furthermore, the retailer offered shallow guidance for the remainder of the year.

From first glance, things might not be so bad. After all, the earnings report shows a per share earnings of $1.01, which is a 23 percent jump. In addition, revenue is up 11 percent, to $2.176 billion and same store sales are expected to rise another 1.8 percent. However, Q3 estimates adjusted down from 55 cents to the range of 22 to 30 cents; the company now expects that the full-year EPS will fall from the previously estimated $3.61 to between $2.80 and $3.00.

With that, shares of Dick’s Sporting Goods plummeted nearly 18 percent—to $28.96—in morning trading. That is a six-year low.

In a statement, the Dick’s CEO Edward Stack said, “We will be more promotional and increase our marketing efforts for the remainder of the year, as we will aggressively protect our market share. We have updated our outlook to reflect these investments. We continue to believe retail disruption creates opportunities for us as we look long-term.”

Of course, Dick’s Sporting Goods—like all other traditional retailers—are learning to operate in an increasingly more digital marketplace, with e-commerce taking a lot of the market share. But it is not just that big box stores are seeing fewer and fewer faces walk through the door. Indeed, many of the sporting good retailer’s rivals are also struggling. Shares of Hibbett Sports fell more than 10 percent wile Foot Lock and Big 5 Sporting Goods (both sporting goods/apparel retailers, though on a smaller scale) fell 4 percent. Under Armour is also down 5 percent; both Callaway Golf Company and Nike are down roughly 2 percent as well.

Stack adds, “There’s a lot of people right now … in retail and in this industry in panic mode. They seem to be in panic mode with how they’re pricing, and we think it’s going to continue to be promotional, and at times irrational, going forward.”
All in all, the retailer said, on Tuesday, it now has a softer outlook for the whole of 2017. The new outlook, of course, will reflect higher investments in a new pricing model with analysts calling for an adjusted earnings of $3.09.