Aldi To Invest $3.4 Billion In US Expansion 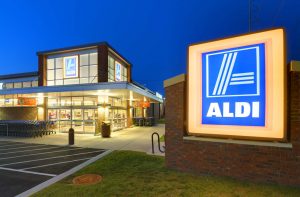 If you have not yet heard about the low-cost grocery chain Aldi, your awareness should soon change. The German-based company has just said it plans to invest $3.4 billion to add another 2,500 store3s across the United States. This will make it the third largest grocery retailer, by store count, in America. By comparison, the nation’s second largest grocer, Kroger—which owns Kroger, Fry’s, Ralphs, and Harris Teeter chains—has about 2,800 supermarkets in the US.

Walmart, of course, is the biggest grocery retailer in the United States.

Currently, though, Aldi operates at least 1,600 U.S. stores in 35 states. Their success comes from a focused, no frills approach to shopping, as well as private-label goods, in a fashion similar to that of Trader Joe’s. The items you might currently find at an Aldi store, then, are often about 30 percent cheaper (on average) than the same—or similar—items at Walmart. Aldi, however, now wants to give its customers organic produce options and meat raised without antibiotics, too.

Indeed, Aldi CEO Jason Hart comments, “We pioneered a grocery model built around value, convenience, quality and selection and now ALDI is one of America’s favorite and fastest growing retailers.”

He goes on to say, “We’re growing at a time when other retailers are struggling. We are giving our customers what they want, which is more organic produce, antibiotic-free meats and fresh healthier options across the store, all at unmatched prices up to 50 percent lower than traditional grocery stores.”

The $1.6 billion plan will not only add new stores, but will also serve to remodel existing stores with new designs that feature softer—more comfortable—lighting as well as larger, more visible and accessible produce sections, wider aisles, and electronic displays throughout the stores. You could argue that the revamp is very similar to what Whole Foods did with their new, cheaper chain called 365 by Whole Foods. In addition, it should create about 25,000 new jobs.

This market, at this time, is quite a competitive one. Larger companies like Walmart continue to drive prices down in order to beat out the competition. In response to this, perhaps, Aldi head of corporate buying, Scott Patton, also comments, “As we continue to expand and grow, our purchasing power